The filler was sanded, the hull was painted and nail varnish stripes added to foot rests - Skiff John B was back in action and ready for a trip!

On our way up the sun kept shining and the temperature in Aberdeen hit 'taps aff' degrees before dropping down to a 'mibies wear a wind proof jacket' in Portsoy. A selection of tents from the Cowan Corner Shop to Fraser's teeny tiny shelter quickly made up the North Berwick High Street at the camping ground and we even stretched to a little suburban section with rather civilised camper van accommodation, bunting and all!

In the evening we were treated to a most spectacular sunset with 40 odd dolphins playing in the bay. A couple(ish) beers and many good catch ups were had before heading to bed early to rest before a day of competing.

The first regatta day kicked off with 2K races where six seat Shetland yoals, despite being in a different category rowed alongside the skiffs. Team NB came third in the Men's Open and our crew in the Women's Open raced past a yoal to claim first place. It was then time for the sprints where Big John joined forces with the formidable Anstruther ladies in their Mixed 60+ crew and they rowed to second place. 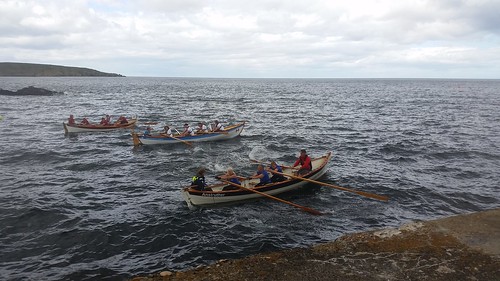 Sadly, it wasn't long after this that the wind started to blow heavily enough to warrant the rest of the day's races to be cancelled but not before Jo and Clive managed to nab a couple of coveted seats in a yoal and join the Shetland crew for a quick spin in the harbour.

Our non-rowing sorrows were drowned in ice cream, rowies, cullen skink, and a beer or two. Sadly the wind kept its stubborn hoolie-gan attitude and Sunday had to be called off all together. We packed up the boat and lingered just long enough to listed to some music, sample some more foods and for Vana to nab a photo with a seemingly random Viking.. 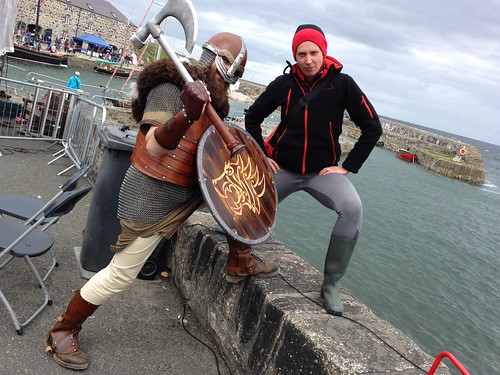 Turns out Vana managed to pick from a sea of people the one hairy Shetlander she'd met 4 year ago while travelling the length of Scotland for a project.

Hoping the weekend was fun even for those who didn't get a chance to row. Captain Jaque certainly made up for it by absolutely and unquestionably winning 'Yellow car' on the journey back.

Big thanks to our hosts for their tremendous hospitality and we hope to see them again soon. 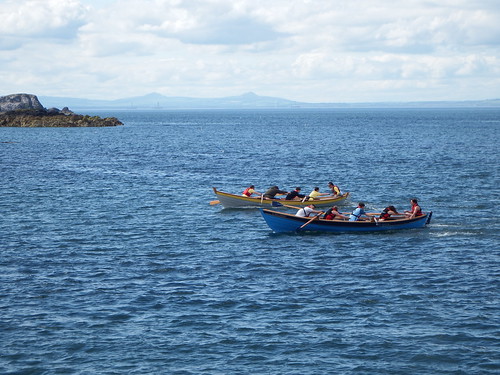 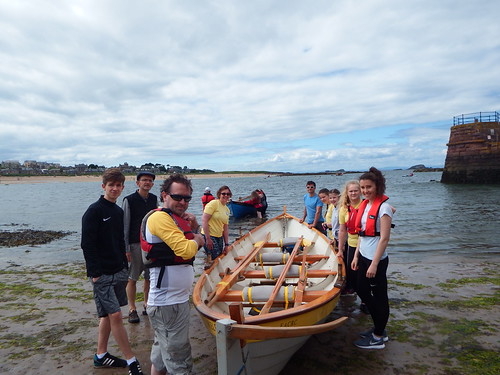 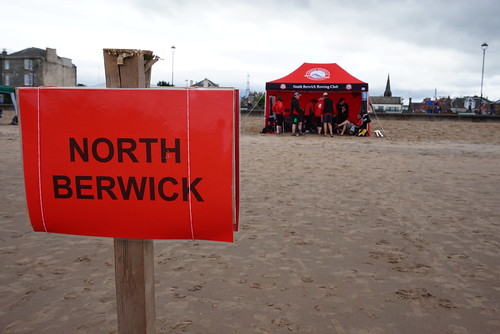 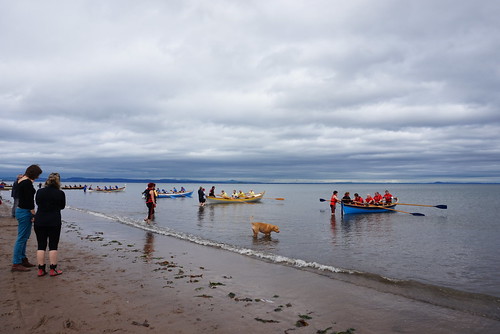 They came on planes, in cars, on boats and jumped on their rental bikes on arrival. North Berwick crews, sporting their natty away-jackets, descended on Woudrichem in style for their first international regatta. 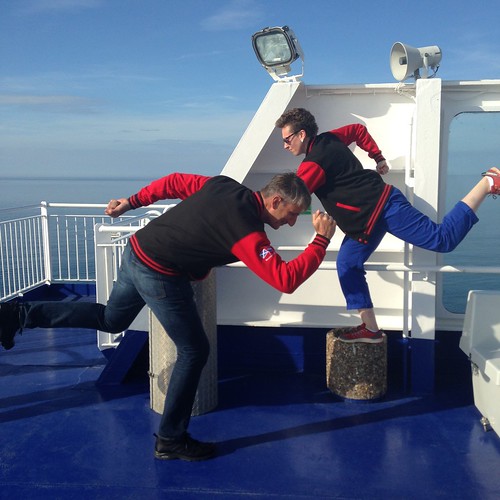 The welcome they found in Woudrichem was overwhelming. A few of us would confess that the prospect of the free camping in a field (following a weekend of - shall we say - mixed weather camping in Achiltibuie) filled them with trepidation. Their fears were quickly laid to rest. The organisers had performed a minor miracle and had transformed the field into a pop up camp site with hot showers and lots of toilets - really impressive. The ferry and towing contingent had kindly erected tents for the late night flyers and were able to fill them in on how amazing the hospitality, area, club house and company were and to point them in the direction of breakfast-with-a-view. They raved about the day of touring and sprinting and the kindness that they had experienced on Thursday. The camaraderie was immediate as old friends and rowing rivals, newer friends -  met at the Skiffie Worlds -  and the newest friends from the Dutch teams, all bonded effortlessly. Laughter and banter was everywhere. On Friday, we rowed or ferried across the river, helped launch a new Dutch skiff in Gorichem and tested herring and Dutch Gin. Vana, Clive and John I. excelled at net-casting in the evening, others excelled at gin tasting on the fascinating city tour and we all enjoyed a trip to the fisheries museum and ate our fill of delicious fried fish (with a few tiny Heinis). 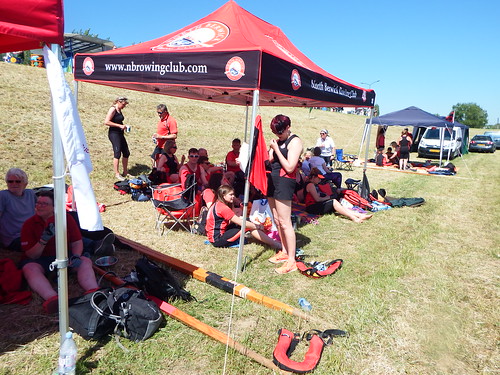 Undeterred by the distracting range of activities, food and drink on offer, an excellent day’s racing took place in very hot conditions on Saturday. Two km races with an individual buoy turn. The heat provided truly testing conditions and there were some close fought results, with the newer Dutch teams proving to be ones to watch.  Somehow, we still found energy to dance the night away on Saturday at the excellent party night and barbecue. North Berwick medals jingled and we were hugely moved to receive a beautiful bronze sculpture by a local artist as best overseas club. The flyers departed early Sunday, leaving the trusty towers and drivers to pack in some last minute experiences of beautiful Woudrichem and its surrounds, before heading for the ferry. There really was nothing more our fabulous hosts could have offered to improve our stay. The haul of beautiful medals and trophies for North Berwick (overall winner, 5 Golds (Women’s 40+,Men’s Open, Mixed 40+, Men’s 60+, <25 Women);  4 Silvers (Men’s 40+, Men’s 50+, Women’s Open; Mixed Open); and 2 Bronzes (Women’s 50+ and Mixed 50+) was nothing compared to the haul of magical memories that we all have to treasure. 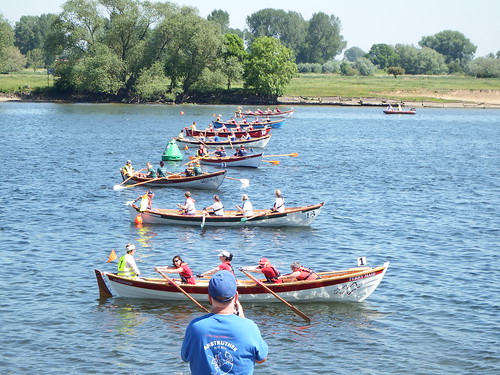 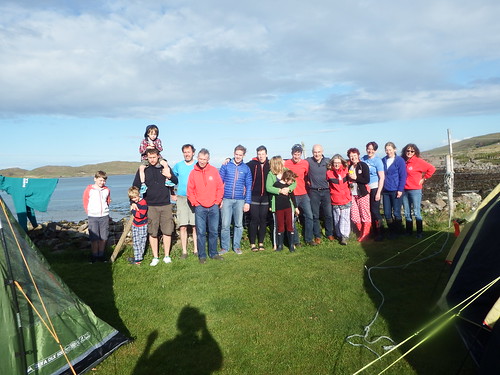 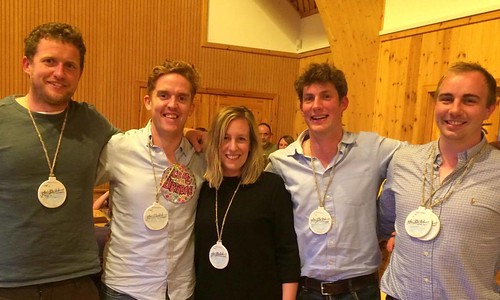