The day started early, after packing boat up in pouring rain and gusty winds the night before, we were blessed with clear skies and hardly a breath of wind. Chilly but with a promise of warmth as the day went on.

The course, clockwise, (90 degree starboard turns) started under the Forth Road Bridge, round a buoy, then parallel to Hawes pier, another turn and back for home. About ten minutes we thought. 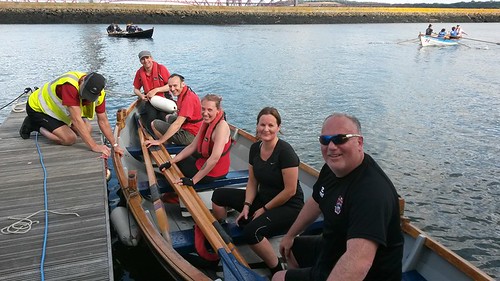 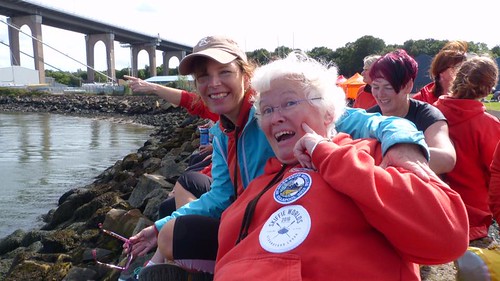 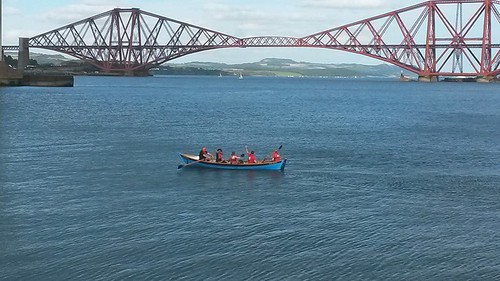 Our fabulous 60+ ladies stormed ahead to take gold in the first race, not to be missed the 50+ men and women crews got silver and gold respectively. These were done in single waves. Now the harder part of winning your heat but also putting in a good time. The mixed open was a strong field leaving NB to miss out on the medals.

The Women's open had ten boats, our boat had a problem with the VHF radio and missed the start, but powered on to get a great first turn rowing through two boats on the bottom leg and managing to take third in their wave to be pipped to fourth by the second wave. Men's open slightly more vocal in the coxing, three boats getting towards the first turn fighting for a good line. Nb came out first and left the others standing to come through in fastest time of the day 8mins 47s and get gold.

Our mixed novice, lovingly cared for and trained by Robbie, looked very professional and showed great technique as they pushed off the pontoon, huge smiles, enjoying the support. They did us proud, starting off in the far lane to bring Skiff John B round the turn with minimal rudder action and flew along the bottom leg and final stretch with a 30 second lead. Novice no more, fantastic job! Queensferry is the place our novices lose their newbie status. Andy's race to polish off the day won by the Anstruther boat, Anne presented little gnomes to the scratch crew. Great finale to a super day. All fueled by excellent soup, sandwiches and cake, the new bridge will be fully in place by the time we're back again. Well done everyone, keep smiling and keep rowing 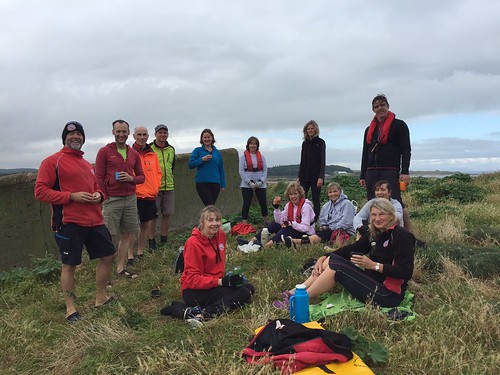 We love going to Largs, a 2 hour trip leaving North Berwick at a fairly civilized time to head over to the West Coast for some skiff racing over a mixture of 2K races and 500m sprints....not sure they're so keen of having us as for the second time, we raided most of their medals...oops. 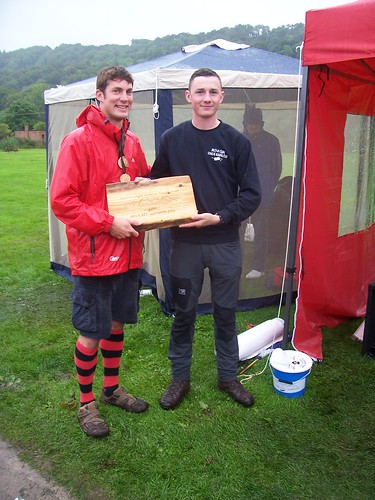 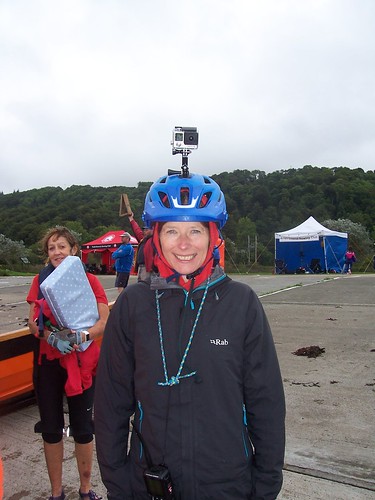 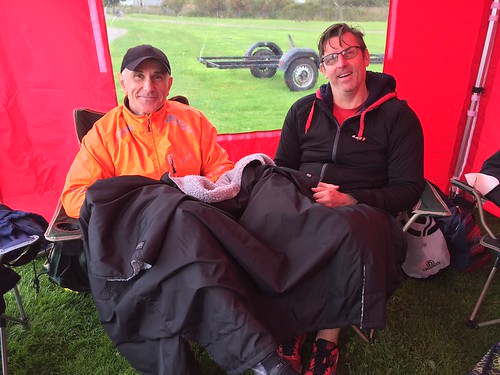 We took a squad of 15 for this years Largs regatta on Saturday, conditions when we arrived were pretty challenging. A stiff southerly breeze was whipping up the sea to produce white tops, but we like it a bit rough so we coped well with the conditions as we tackled the 2K, which involved surfing down to a buoy before battling back for the second half, great stuff.

Our men got a pretty good start, but doubted ourselves when the other competitors stalled on the line, a quick check to ensure we hadn't false started before getting stuck into the kind of racing we enjoy, check it out on this video.

After the 2Ks the format shifted to a 500m sprint, a good opportunity for some new coxes to have a go at racing without the complication of mass starts and single buoy turns. The rain had started which flattened the water and made the racing faster, doesn't bother us though, we like it wet :-)

Thank goodness for the Gazebo, we were able to enjoy a lovely West Coast Indian summer (raining cats and dogs, but not actually Baltic). We knew Newburgh were keeping their powder dry and so it seemed as they knocked us down to second in the last two sprints of the day.

We must make more trips over to the West, they have great water, lovely scenery and tremendous ice creams.

In sitting down to write a Captain’s report for our regatta, I’m painfully aware of two things; the newly raw areas of my bottom from one too many trips around the Craig, and the likelihood that in describing all the effort, hard work, racing success and community spirit embodied in regatta day I’m at real risk of exhausting superlatives.

The success of the regatta and the wonderful feedback we’ve had from the 13 clubs who came to race, eat cake (in vast quantities) and make merry, is testament to our little club’s diverse and talented membership.  You should all be very proud of yourselves!

The day started with grave doubts about the weather and sea conditions – flat calm and practically windless is not what visiting crews have come to expect from a North Berwick regatta.  Fortunately the weather gods started to see sense after lunch and conditions in the afternoon deteriorated nicely to give everyone a proper flavour of coastal rowing (I was gratified to see rowers visiting for the first time describe how rough and tough it was whilst wearing big smiles on their faces).

The full race results are, of course, available to see on the club website so I won’t go into the minutia of each race but I was delighted that over 50 rowers competed for North Berwick (the majority of whom had two rows) and every single one did the club proud.  In all bar three races we had two boats entered, and in the Mixed Open and Men’s Open we went one better and had all three North Berwick skiffs on the water! 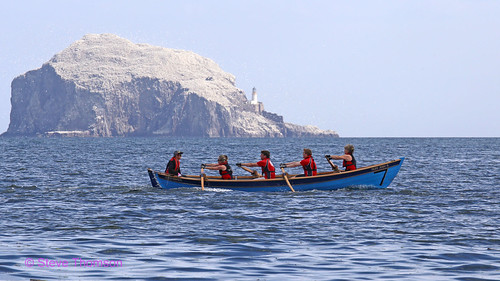 Owing to the considerable advantage of having this kind of gargantuan force we didn’t run an overall club points competition, but luckily Rain-Man Davidson (Ed: NB being an arty place, knowing your 7 times table constitutes being at the idiot savant end of the spectrum) calculated it anyway and we would have finished on top with Eastern just 2 points astray.  Golds from both 40+ crews, 60+, Mixed 45+ and Men’s Open were supplemented with crucial Bronze points from our Novices, Under 19s and Ladies Open.  Special mentions to novice Vana who was subbed into the Ladies Open crew at the eleventh hour (and won her second bronze of the day), Medium, Fin, The Andies and cox Elisa who formed a scratch Men’s crew with seconds to spare and came 5th, and Connor, who survived an audacious attempt by Saskia to change his hair style from the other boat.

Compared to previous years where rough water tended to spread the field widely on the approach to the island or turning buoy, the calm conditions made for fierce competition with tight packs of boats vying for position so hats off to the coxes for keeping calm in the melee and of course thanks to the safety boats, umpires, starters and timers (and David Davidson for organising them all) who kept us safe. 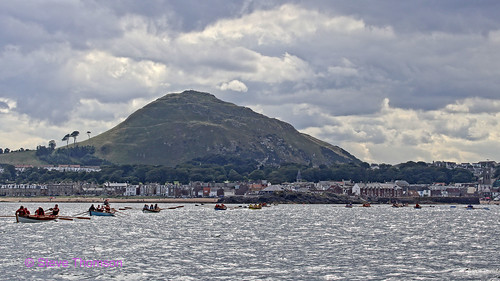 
Rachael and Tracy did a fantastic job organising the Hope Rooms and a spread of rolls, cakes, sweets and treats made by members and their families on a sumptuous scale was happily devoured by our visitors.  Thanks to all who provided the goodies and everyone who helped run the stall and clean the place up in record time.

The church hall was packed for the presentation of the 180 diving gannet medals crafted by Yolanda and her team and it was fantastic to see our visitors in their many club colours enjoying a drink and some post-race analysis.  Particularly satisfying, if I may speak with my Men’s Open hat on (note to Clive: we need hats), was the proof that our sartorial elegance hadn’t gone unnoticed at the World’s and had inspired the women of Avoch to wear vibrant tutus tastefully accessorised with a black and yellow wig for Alan their cox.  It feels like pebbles falling before the avalanche…     As ever DJ Sandy provided the aural stimulation required after a long day at sea and although it may not have been obvious at the time I can confirm that I thoroughly enjoyed the dancing.

Without further gilding of the lily and callously ignoring the waves of sentiment lapping lightly around my ankles I would finish by saying how proud I am that we demonstrated the very best values of our club on Saturday and long may that continue.

Our regatta this year will be held on Saturday 27th August. We will have races around Craigleith, approx 1.8miles, which takes anything from 18-30 mins depending on conditions of water and crew!

Below is the draft schedule of race categories, if we do not get enough entries in some categories, we may merge them, or shorten the course in order to get through all the races. Our intention though is to hold the races in the following order, which should help you to plan crew availability.

Maximum boats we can start in one race is 12, if we get more entries than that, we will split into an A and B race. They will be separate races with first across the line being the winner (rather than using the time to determine winner). Allocation into the A or B race will be influenced by the club's results at Skiffie Worlds for that category.

*The Mixed Novice / Fresher event is a single race open to crews of Novice (never won a race) or Fresher (first year of rowing) rowers.

**60+ and U19 will be handicapped races, meaning you can make up any combination of male or female rowers provided they are within the age category. For the juniors a handicap system will be used for each year band from aged 14 to 18, allowing younger teens to compete fairly against older ones. The handicap system will be used to adjust the times based on gender (and in the case of juniors, also age) and determine winning crew. We are likely to shorten the course for these categories to fit all of the races in.

Crews racing in “mixed” category events must have at least one male rower in the crew, and there must be at least 2 female rowers rowing at all times.

Please help us with our planning by getting your entries in ASAP, closing date for entries is Friday 19th August 2016.

For further information on the regatta, or anything else to to with North Berwick Rowing club please mail us at This email address is being protected from spambots. You need JavaScript enabled to view it.