Five intrepid adventurers from North Berwick Coastal Rowing Club set out for a few days touring the coastal waters of Argyle. Basing themselves out of Easdale Island they spent 3 days exploring the area in 2 privately owned 18’ Skurs with a view to improving their overall planning, navigational and technical skills that they could then share with other club members on their return.

Skur names: “Agnes” and “Euphame” commemorating two of the women accused and executed as part of the North Berwick witch trials in the 1600s. 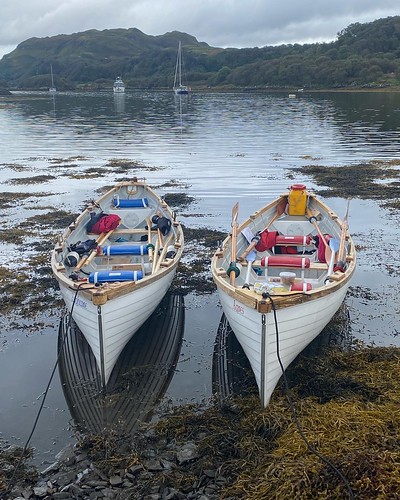 Day 1 - Friday 16 September 2022 – Travel Day!
Travel: Having acquired a double decker trailer (thanks Steve F) and braved the Edinburgh bypass, there was a short ferry journey to Easdale on arrival, leaving rowing boats on their trailer on Seil. 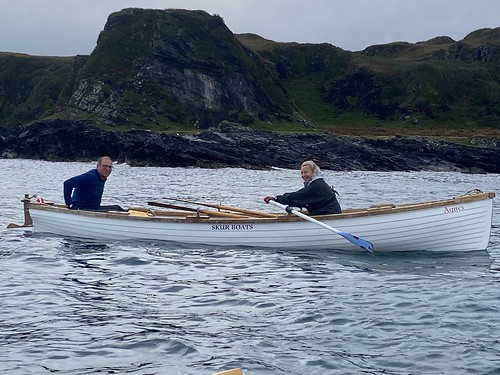 1028: Enter the Cuan Sound, easily identifiable by electric pylons. Significant tidal assistance as expected. Cross in front of ferry as it was setting off from Seil.
1044: At North point of Torsa, turn to starboard, heading south towards north end of Shuna. Plenty of seals taking an interest in the skurs and joining us for part of the way.
1105: Swap coxes, just to SW of Degnish Point Amanda takes over. Dolphins spotted! Turn east into loch Melfort. In Kilchoan Bay phone ahead to Melfort pier, to be advised of no coffee shop there.
Chilean Billionaire house, with plenty of work going on and all of the main flags displayed at half-mast. Pass between Eileain Coltair and the shore (narrow passage), then turn south and pass between Eilean Coltair and a small fish farm to the east of the island. Head over to North Ashnish Bay.
1245: Round Arduaine peninsula. Pass very close to Arduane point, inside the reef that stretches SW from it, to pass into Asknish Bay. Land on a small sandy beach below Loch Melfort Hotel and eat lunch on the beach. Tried to go to hotel for a mug of coffee but put off by intimidating cows cooling off in the water.
1315: Ann coxing. Depart lunch stop beach and head SW towards Shuna. Leave Eilean Creagach to port. Pass along SE shore of Shuna, possible Sea Otter sighting. 2 white tailed sea eagles taking flight around Shuna Point.
1418: Turn North, and row up to Shuna Cottage where we stopped (1440) alongside a small jetty for brief step ashore to powder our noses.
1450: Duncan coxing. Depart Shuna Cottage. Head North up Shuna Sound. Cross over to Luing Shore. NW Wind building. Rest at oars near the entrance to Ardinamir. Robbie worries the rest of the crew by suggesting we tidy up boat, putting loose clothing and equipment into dry bags and tying dry bags into the boat. He then gets out his sailors’ prayer book and mumbles something. Pass north point of Shuna and turn west into Cuan Sound. Fairly strong tidal assistance. White horses spotted beyond the smooth water of the sound itself. Conditions extremely “sporty” once we were out, with wind against the strong tide. Robbie’s reason for caution now apparent, the rest of the crew hope he recited the correct prayer. Not able to turn back due to tidal stream, Duncan took a crash course in coxing in very challenging conditions, but he is made of stern Yorkshire stuff and with his poker face comforting the crew who couldn’t see the relentless breaking waves that were coming at them we pressed on towards Easdale sound.
1715: Arrive Easdale. Tie up at pontoon within Easdale Harbour. We have made it! Dress for dinner. Meet Jacque off the ferry.
18:15: Take the ferry back to Seil for dinner at the Oyster Bar and tedious tales from Duncan of how he saved all their lives.
Total distance rowed: 35.6km 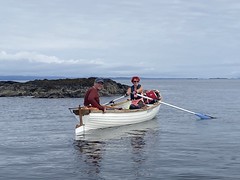 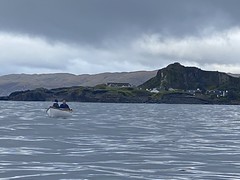 Day 3 - Sunday 18 September -
HW Oban: 1110
East going stream in Cuan Sound starts: 1010
West going stream in Cuan Sound starts: 1625
Weather forecast prior to setting off: Dry am, showers pm, high of 15 degrees, wind NW 11mph
Crew: Duncan, Robbie, Amanda, Ann. Jacque
Vessel:
 Agnes with Robbie, Ann
 Euphame with Duncan, Jacque, Amanda
Row Skur over to Seil with 5 crew aboard. Take Agnes off trailer and launch.
0943: Depart Ellanbeich with Amanda coxing Euphame and Agnes going freestyle. Heading south again towards Cuan Sound. Sea state smoother than had been experienced the afternoon before. Slighter breeze.
1010: Enter Cuan Sound. Tide fairly slack. Jacque wondered what all the previous days fuss had been about. Yachts motoring in both directions. Our seal mates from yesterday join us again. Turn North from Cuan Sound. Continue North up Seil Sound, leaving Balvicar to Port, with intention of heading towards Clachan Bridge (over the Atlantic). Pressing on smartly to try to make the bridge and Clachan Sound before the tide was too strong against us.
1145: Pass under Clachan Bridge. Several spectators, who after we had passed were scattering ashes off the top of the bridge – timing is everything! Progress up the Clachan Sound to Northmost tip of Seil. Turn tight to port and go deep into Phuilladobhrain. 3 yachts and one large motorboat in the anchorage. A haven for Herons.
1215: Land on the island at SW coroner of Phuilladobhrain for lunch stop, pulling both Skurs up on the shore. The midges come out to play.
1240: Duncan coxing Euphame. Robbie and Ann doing their own thing on Agnes. Pick our way between the islands and among rocks to leave Phuilladobhrain by the backdoor and head across Ardencaple Bay. Turn SW after Rudha Garbh Airde. Intending to head out to Insh Island, but weather pressing in and Amanda dreaming of a dark n’ stormy, so decide to leave that for another day.
1400: Arrive back at Easdale, mooring both boats side by side on the Easdale pontoon. Walk, museum, skimming. No ginger beer for the dark n’ stormy so Amanda gets stuck into the whisky. Lovely dinner prepared by Jacque and boys stayed up to watch Match of The Day.
Total distance rowed: 19.5km 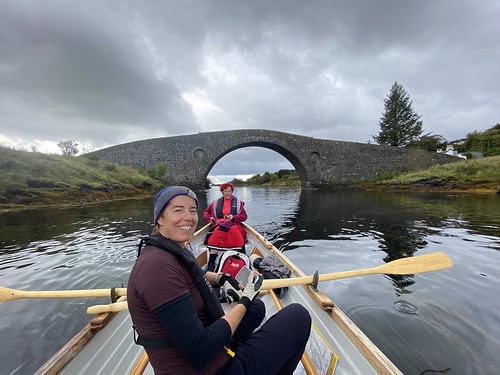 Day 4 - Monday 19 September – Cheeky farewell row
HW Oban: 1226
Weather forecast prior to setting off: Dry, High of 15 degrees, wind W 6mph
Crew: Duncan, Robbie, Amanda, Ann. Jacque
Vessel:
 Agnes with Robbie, Jacque
 Euphame with Duncan, Ann, Amanda
Departure day from the cottage. Pack and clean. Load all our luggage into the two boats, and flit to Ellanbeaich. Unload most of luggage to the wee car for storage.
0946: Depart Ellanbeich - Widdershins circumnavigation of Easdale (apparently this means anti clockwise). Explore the flooded quarry at Ellanbeich 1005: Depart Easdale sound, heading North towards Insh Island. Hermit cave on the island? Pass between the main island and Sgier Beul nah Uamhaidh. Widdershins circumnavigation of Insh Island (still anti clockwise I believe). Exploring the rocks on the North side, stopping for a fizzy fish and jelly baby snack. Head towards Seil shore.
1155: Rest at oars in silence. A period of contemplation to coincide with the end of the funeral of Queen Elizabeth. Head south towards Easdale Sound again.
12:20: Land at Ellanbeich. Unload gear from boats. Load boats onto the trailer, sit on bench for lunch with carry out coffee from Oyster Bar. Drive home. Arrive in NB before 1900
Total distance rowed: 11.4km 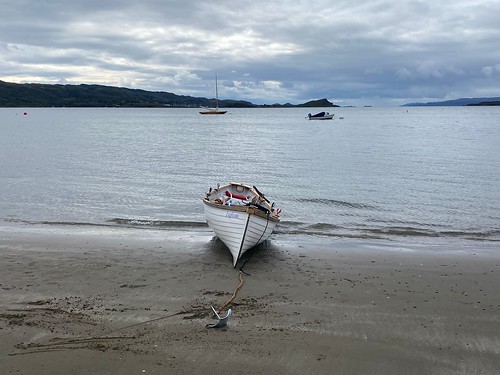 Notes about the boats: Our first real outing away from home with skurs and they acquitted
themselves brilliantly, even in the more challenging conditions. Just as easy to row with a 2, 3 or 4 crew/cox combination which provided good flexibility in boat set up. Skiffs should be equally at home on these waters.
Notes about the crew: Age ranges 54-65. All experienced in rowing St Ayles skiffs. 3 of the crew relatively new to sculling and this was an excellent way to hone their skills as conditions varied within the day as well as from day to day. Only Robbie really had the experience of planning this kind of trip away but coached the others (with varying degree of success) to understand what is required to undertake an expedition.
Notes about the area: A beautiful area to visit and explore by sea. Careful planning is required to ensure you understand the impact and limitations tidal flows have on possible routes and always good to have route options both at the start of the day depending on conditions and to highlight any “get out” options during the day should they change.
Notes useful for our next adventure: Bring more ginger beer! Take flasks along for tea and coffee.