The sun, remembering for once that it really should have its hat on in August, dazzled a hard core of North Berwick rowers who had made the trip up to the Big Orange (widely known as Newburgh) for a day of racing on the Tay.

The course was just over a kilometre with 3 turns – the first a sharp bend around a pink buoy, the second around a small grassy islet which promptly disappeared as the tide rolled in and a moored up boat which seemed to be hit a little more than its owners probably liked.  A speed demon on a jetski provided safety cover and spectator hydration in equal measure and was joined at one stage by a great raft of fellow jetski-enthusiasts doing their best Hawaii Five-O impression and lending a wonderfully Californian feel to proceedings.

In addition to NB there were representatives from Broughty Ferry and Wormit rowing clubs which meant that along with the hosts most races had 4 boats starting in randomly allocated lanes.

Conditions were testing with the wind blowing West to East and a much stronger tide flowing East to West.  The first race of the day was the 40+ mixed and it was evident from the outset that the tide and lane draw were going to have a big effect on the results.  The starting hooter blared and the crews all leapt in action, pulling with around 100% of their might but not making much progress against the racing tide.  Eventually headway was made and it was apparent that, like so many of these races, the first boat to the turn was very difficult to beat. 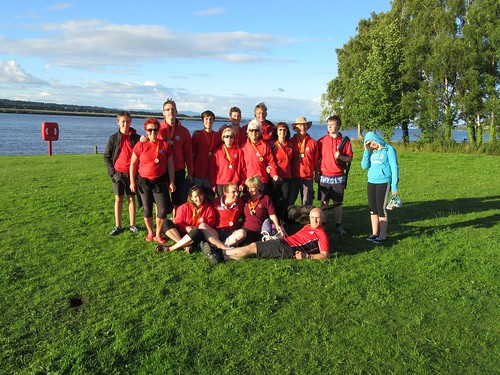 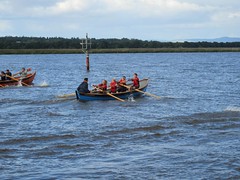 Competition from Newburgh and Broughty Ferry was fierce and Wormit, although left behind in the earlier races, rallied towards the end and picked up some good points for their club score.

In the first 2 categories NB suffered from less favourable lanes and stiff competition to finish third in each but the brutish chaps of the 40+ gave the baying supporters satisfaction with a convincing win.  No doubt the sweat dripping from Dave’s noble scalp inspired the 40+ women to repeat the exercise.  This performance was double excellent in that Tracy and Ann who made up 50% of the crew are relatively new to the club (and subsequently competed in the novice/fresher category) and having turned 3rd at the first buoy the crew showed their mettle by overhauling both the Broughty and Newburgh crews before the final turn.

Our under 19 squad of Cameron, Euan, Saskia and Gregor put in a strong shift but were ultimately pushed into second by a strong set of Newburgh lads, before our Novices pulled their way to another victory.

The winning streak continued with the Louise, Claire M, Issy and Sheena beating all-comers in a hotly contested Women’s Open.  An exciting feature of the day’s races was their rich “incident” content and none more so than this one.

The organisers decided to reverse the course for the Men’s Open, to appease the clockwise gods and reflect the changing conditions.  The previous outer lane advantage disappeared with the lanes closest to the bank benefitting from slacker water but once again it was the first skiff to the turn that proved to be unassailable.  In this case Broughty shot from the start line like a startled walrus and got there first.  A clashing of oars between North Berwick and Newburgh gave them the chance they needed to take a comfortable lead and despite a spirited performance from NB in closing much of the distance, Broughty won through to the line leaving the NB boys a disconsolate second.

Fortunately their demons were exorcised and exercised in the Decades race with a strong North Berwick crew representing respectively Teens (Euan), 20s (Ben), 30s (Ian) and 50s (Medium) romping away to win by decent margin with excellent tactical coxing from Phil.

Much clapping and hooting was to be heard at the awards ceremony in the evening sunshine where it became apparent that almost every NB rower had come away with a medal.  This strong combined effort meant we tied with the hosts for most club points – a great testament to all the hard work and training that everyone puts in.  A fantastic day was had by all and thanks to Newburgh Rowing Club for a really enjoyable and challenging regatta, warm welcome and delightful cakes.