Anstruther, Royal West, the FOCCRS, NB and Arran, who were an unknown quantity, made for a thoroughly jolly, competetive, yet friendly day.

Memories from 2015 were of relaxing on the beach, where the warmth of the pebbles massaged tired muscles, after a gruelling 1500 metres time trial over a triangular course.  There was no sun worshipping between races on Saturday, although the welcome from our hosts was warm and exuberant.

This was an unusual event in that it was a time trial, rather than a head to head competition.  Teams needed a crew member to start the time trial by picking up a baton from the race hut, sprinting across the shingle beach navigating two tyres, strategically placed on the slidy concrete slip, running across the remaining shingle to then leap majestically into the bow seat with all the grace and poise of a balerina.  Unfortunately, there were few gazelles amongst the NB visitors and the choice of footwear thwarted attempts at grace and elegance even further, crocs and sandals will no doubt be left at home next year.  Once all four rowers were in the boat the rowing began, finishing on the beach and the clock stopped when the, by now exhausted, runner once again hurdled over the bow onto the beach to return the baton to the official at the race hut.  A great deal of hyperventillating was witnessed but, thankfully, there was no need for a defibrillator.

During the break for lunch, the re-dedication of the Zebra on its 50th birthday, named after a visiting cricket team, and the Whiteforeland, two newly reburfished by GalGael Community Enterprise boats, provided a historical diversion from the racing.

Always keen to extend the hand of friendship to other clubs, NB responded in the affirmative when Arran, short of a full 50+ women's crew, approached and politely requested one of our many ladies switch allegiance for the last race of the day.  Exceptional PR proved to be a coup for Arran, who proceded to beat the NB ladies by one second to take the medal.

Our two juniors,Kirsty and Saskia, rowed in the women's open crew with great gusto and applomb and later in the day made up a composite crew, ably assisted by Arran and Royal West in the junior category, racing against two FOCCRS teams. Further highlights were the 40+ women securing victory, open men scoring the fastest time of the day at 11:01, 40+ men storming to an impressive win, the joker was played by the open mixed crew, securing double points for that win. 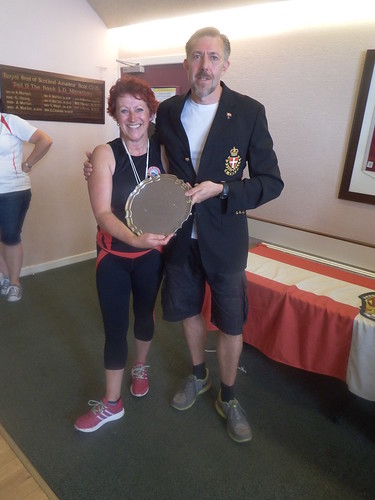 North Berwick were overall winners and won the Colin Ross trophy, which will be displayed with great pride when our trophy cabinet,or even clubhouse, is built.

Team NB departed with a warm, fuzzy glow and sense that a thoroughly pleasing time was had by all, thanks to the exceptional Gastfreundlichkeit (Ed: v nice in a roll with mustard) extended to us by our friends in Greenock.