Helmsdale, as we discovered, is a long way from North Berwick to drive on a Friday afternoon. We've bumped oars with the Bunillidh crews at many regattas over the last few years, but they'd always said that their own regatta was just a wee affair for local clubs only, well we asked, and we pestered and finally we said, "We don't care if we're not invited, we're coming anyway", and they got the hint, North Berwick fancied a road trip North.

So we gathered a small, but perfectly formed squad (just 6 in the end), packed the boat  and zoomed off to sit on the Edinburgh South Car Park, I mean Bypass. 8 1/2 hours  later we were definitely not in Kansas anymore, but up in Sutherland pitching our tents in the dark at Helmsdale. 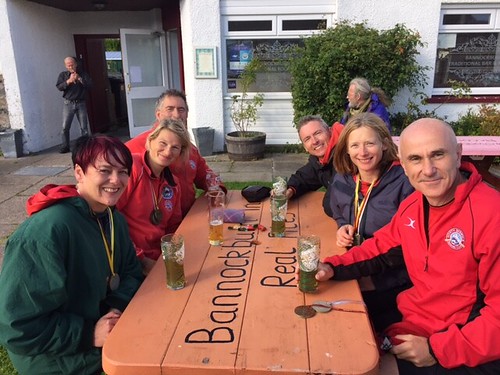 The morning brought strong strong wind, but it was blowing offshore and the sea was perfectly manageable. The course at Helmsdale was a straight 1KM race, and up to 8 boats racing. With a squad of just 6 it meant plenty of races, which we were all up for, everybody got 4 or 5 rows. We had 3 men and 3 ladies, but Laura and Jo were able to step into the Men's 40+ and Men's Open races respectively, and we borrowed Julie from Burghead and Ann-Marie from Coigach to make up the Ladies crews.

It took us a couple of races to get the hang of the local start procedure, but our ladies did very well getting silver in the Ladies 40+ and winning the Ladies Open. Our 40+ men (with Laura rowing) were squeezed out of the medals by 1 second, and our Open Men (with Jo being honorary 4th man) got a hard fought bronze.

The afternoon was mixed races, however it seemed that the back to back rows were beginning to tell on our stamina, and we didn't threaten the podium for the rest of the day, but enjoyed some great rows and loved the days racing.

We were so happy to have come, and were made to feel very welcome by all the great people at Helmsdale, special thanks to Andy for spotting our thirst before the medal ceremony and magicing up a few beers for us from the boot of his car, top man! 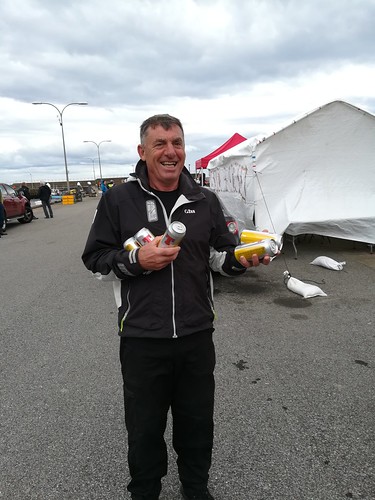 Apres racing we managed to quaff a few in the local pub and learned how to fold a crisp packet into a nice neat triangle, which is apparently a skill acquired on an elective course for an accounting degree at Aberdeen University.

A post regatta boogie saw the end of a great day, thanks very much Bunillidh for a fantastic weekend.