"Row the Tyne", an indoor rowing event to row the length of the River Tyne, well how hard can that be? I'm not even sure it's East Lothian's longest river, starting just South of Haddington. But I was soon disabused of my complancency as apparently there is a longer River Tyne in England near Newcastle, in fact 118KM of it.

The event was for 50 teams of up to 6 people, rowing on a Concept2 machine continuously for 7 hours in a race - brilliant, my idea of heaven :-)

Bizzarely, when I tried to recruit a team there appeared to be a lot of clashes with previous commitments, suffice to say that weekend there were a lot of freshly painted toenails in NB.

But we got a team of 5 entered with Ian Baird, John Irvine, Andrews Dalley and Andrew Hunter. 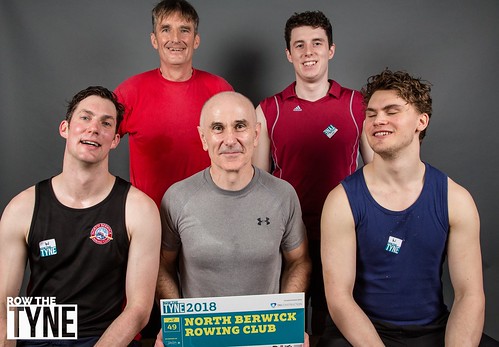 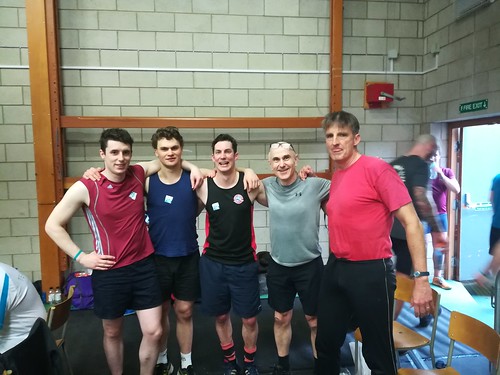 
The event started at 8:30am and, it being Newcastle, by 8:35am the shirts were off and the tats were oot. Most of the teams were Crossfitters. These were serious hard bodied athletes who were absolutely pounding the ergo, the team in front of us were crushing sub 1:30 times. Even Big John was compelled to say that if this was back in '78 (before the laser treatment to remove his Dragon Tattoo) he'd have peeled down his all-in-one to show off his abs and ink.

We settled into a strategy of 3 mins on, in rotation and managed to maintain a sub 1:50 pace for the whole piece which was bang on our target, finishing in 7hours and 11mins. Of the 49 teams that started, we finished in 17th, but were promoted to 12th on the weight adjustment because we only have 5 members.