22 North Berwick red shirts (nearly a quarter of the club) braved the 13 mile row up the river Clyde on Saturday.  NB sent a fleet of 5 boats, some with 4 rowers, 3 rowers and 2 rowers - but all with 4 oars!  There was a total of 75 boats in the inaugural Castle to Crane race (actually, two castles, and three cranes, but let’s not be picky), and the greatest gathering of St Ayles skiffs ever seen.  Amazing sights included the historic Birlinn rowed by Galgael and the dazzle camouflage skiff. 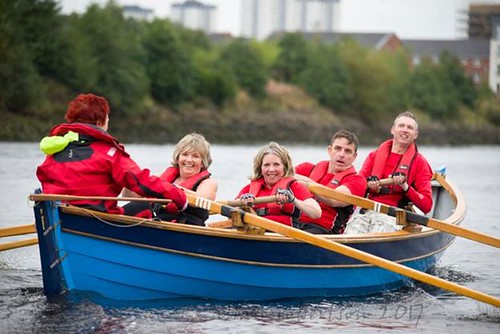 The course is long, passing many landmarks and finishes in the heart of Glasgow.  After nearly two hours of hard rowing it was wonderful to hear our cox say that he could see the Armadillo and the Tall Ship.  It wasn’t easy to maintain our composure and discipline when we rowed under the pipe band on the Millennium Bridge up to the finish line at Finnieston Crane.  A super way to finish! 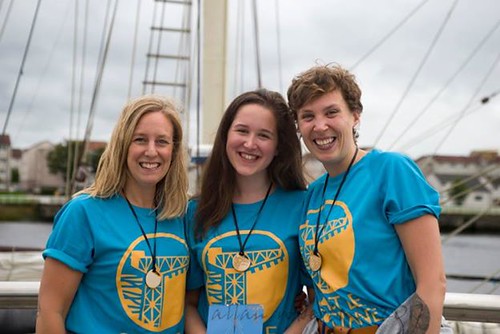 An excellent write-up of the day is here in the SCRA web site and full results here.

We then recovered in the fabulous Clydebuilt festival atmosphere - super food, music, beer and traditional boat building exhibits.  And beer.  Did I mention beer?  That was important.  And FOOD.  Lots.

Well done indeed to the organisers of the Clydebuilt festival and the Castle to Crane race, and many thanks from North Berwick to all the volunteers who made it all possible.  We’ll be back...

Thanks to Allan Robertson and Daren Borzynski for permission to use their photos.