Last weekend saw the regatta circus move from one of the most distant venues to one of the closest, namely Port Seton. As a result of the Edinburgh marathon on the Sunday, the regatta was held on the Friday and Saturday and it was a skeleton North Berwick crew which took part in the first day's racing. The regatta organisers were hoping to try out a new race system with initial heats taking place outside the harbour but the sight of waves crashing over the harbour wall put paid to this notion and in the end, the heats and finals of the Friday races (the men's and women's opens) were held entirely within the harbour. Both North Berwick teams performed admirably with the ladies losing narrowly to Anstruther in the final and the men losing by a similar margin in the battle for third place. As the boats were put away for the day and the delicious smell of cooking burgers began to drift across the harbour, the sun broke through the clouds auguring well for the next day's racing. 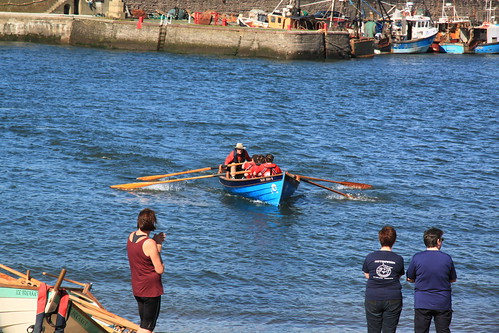 Saturday dawned with near perfect conditions allowing the initial heats to take place outside the harbour as planned (and incidentally giving crews another chance to get some practice at the Worlds buoy system). As the afternoon progressed, it became clear that the North Berwick crews were turning superb performances, indeed not until the second last race of the afternoon was a North Berwick crew beaten. Of the six classes contested, North Berwick won 2 gold (men's and women's decade) and 3 silver (woman's open, novice and mixed open), We even won the relay thanks to some inspired power walking between Cockenzie and Port Seton by our crews. Special mention must be made of young Finlay Robertson who, in his first regatta, was competing in both the men's decade and mixed novice crews and must have wondered at times if he would ever be allowed to get out of the boat.

This terrific performance shows that all the hard work by Hugh, Tim and their crew to produce a superb racing skiff and the equally hard work by Dave, John I, Robbie and Steve to turn us into lean mean rowing machines is paying off. Next up, sunny Dunny and another chance to shine.