After an endless winter, the first regatta of the season was upon us. Port Seton harbour was the venue for a few fast and furious sprints, with a couple of tight buoy turns to boot. This was a great test for the crews’ skill.

North Berwick sent a strong contingent of rowers, clearly itching to get going in the new regatta season. Before all the racing commenced for the day, a group of foolhardy individuals thought it would be good idea to up the intensity of the day’s workout and row Skiff John B there before the racing.

We were under strict orders to be at Port Seton by 10am to make the cox’s briefing and avoid any time penalties for our boat, which would be devastating on the short circuit round the harbour. So no pressure then …! But forget all that, the real target was obviously to beat the previous club record time for the route! 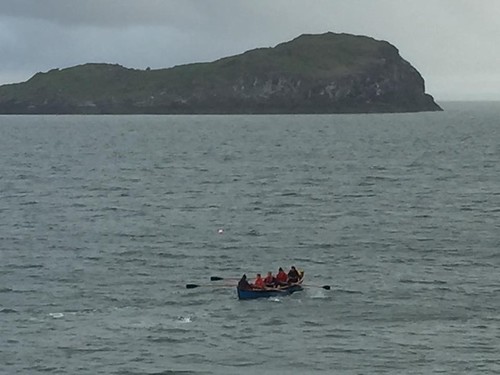 Dave led the team of Louise, Jacque, Duncan and Ross, setting off from NB around 7.15am to tackle the 13 mile course along the coast. With dark grey cloud to the east and west, we set off in high spirits. After a choppy start to Lamb/Fidra, the water smoothed out to allow the team to make good time. It might have been even quicker if not for a few lengthy changeovers en route to allow some members to organise their attire!

What a way to see our coastline and take in the sights – the Puffins skimming around the boat, Guillemots rising from Fidra as we cruised past and then on towards the submarine wreck at Aberlady Bay. Without the towers at Cockenzie anymore as a landmark, it made it slightly more difficult to pick our course, but nevertheless Jacque steered us into the harbour in good time – clocking 2hr:17mins and smashing the previous record! 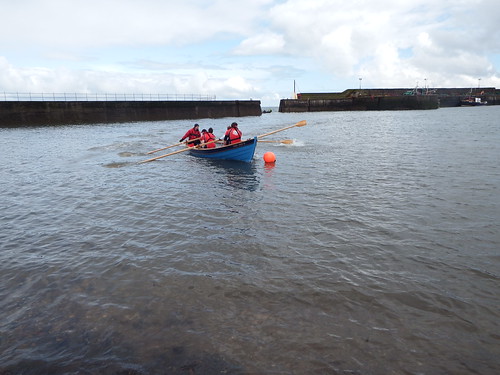 A great welcome met us in Port Seton, where teams were gathering for a busy day of racing ahead. With 70 races scheduled for the day, there was no hanging about and quick changeovers were needed to ensure the races were completed whilst there was still enough water in the harbour. The oval course around the two parts of the harbour had the start/finish line in the middle, marked by the narrow gap in the harbour wall. It was perfect for the spectators to see how the racing was progressing. With boats setting off in opposite directions, it set up a head-on game of ‘chicken’ as boats met at the midway point through the narrow gap – a good test of the coxes’ nerve. 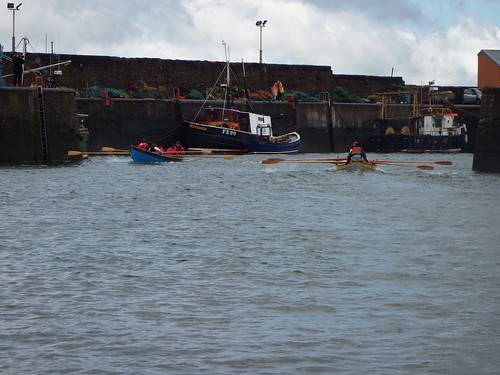 The racing began in wet and windy conditions, but that did not deter the Men’s Open team, progressing through the heats and semi-final, before taking the silver medal for their efforts. The weather improved and the sun came out for the afternoon races. Sadly, the Men’s Open was to be the highlight of the day in terms of a medal haul and it was a struggle to set good enough times in the heats to make the semi-final or final. The men’s 45 team did manage to reach the semi-final, but it was our hosts for the day, Boatie, who were cleaning up with the medals.

It was a great day, great hospitality, and good experience for our crews, with some very tidy buoy turns executed on the day (and some not so great turns, but don’t think too much paint was scraped off that fishing trawler in the harbour!!). 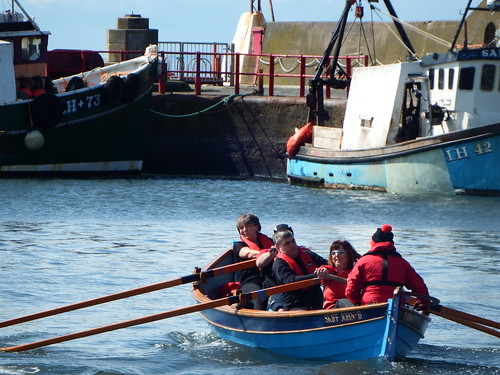 We have plenty to build on for the regatta season to come … and perhaps NB is more suited to the longer distance races! Luckily, somebody did bring the empty trailer for boat at the end of the day, as it would have been a very long row back to North Berwick.