Well we rowed, cycled, and walked the 5,300,000 meters from North Berwick to New York to arrive and find we're still in lockdown, JFK is closed, and we're going to have to row back....but need some new shorts, so let's go to Bermuda next stop.

Now a firm fixture in the NBRC calendar, the 4th and biggest yet, Christmas ergo relay event took place in NB Scout Hall. 25 super excited participants, aged between 13 and 63, took part in finely balanced teams of 5, each person rowing 4 x 250m. How hard can that be - 45-60 seconds x 4?! Fast and furious, all important changeovers with varying degrees of perfection and each team boat tracked on a big screen thanks to Ian and the Concept 2 technology. Huge congrats to the winning team Craigleith - Clive R, Ann, Sam, Gareth and Jon. Inspired by our double Olympian guests, Rachel and Jon, the stars of the show and ones to watch for the future were our 2 juniors, JJ Wallace and Sam Cowan. Big shout has to go Vik as the biggest improver and Jon for agreeing to take part in his jeans and shoes with 2 minutes notice! Fantastic event and thanks and well done to everyone who took part. Merry Christmas!!!

Skiff John B made the rather long journey recently to take part in the amazing Castle 2 Crane for the third year running. Deposited by drivers Millie and Sam at  Dumbarton Castle, ready to spend the night with 74 other boats. Predominantly skiffs but a few others too including wee sisters Flossie and Speedwell,  pilot gigs and  a super wee double skull from Broughty Ferry called Georgia.

Saturday dawned bright and with a forecast for a slight head wind, which we'd need to keep us cool. Millie, Sheena, Scott and Rob were my rowers. Bacon rolls and more coffee were enjoyed  before our start place came about. Number 52 and we were off, 12 noon on the dot. Out to the first perch to turn up the Clyde. But wait, that wind is much stronger and my goodness the white tops and waves. The pushing started. 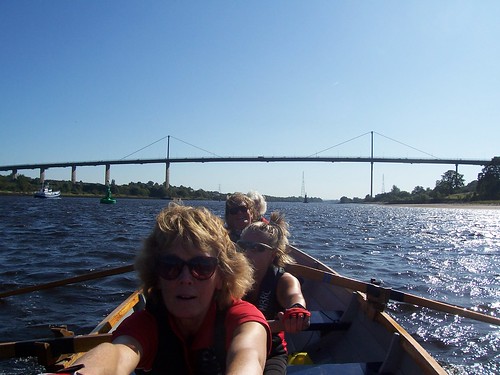 It took us 58 minutes to get the Erskine bridge, such a slog. We'd overtaken a good handful of boats already. Water taken on and a few wee snacks but no stopping for my awesome crew. Up through into the city concentration and loads of encouraging chat. Some great moments of laughter with misheard chat, not like Scott, ....the safety boat actually came over to make sure we were ok as we were all in stitches...it did lighten the load.... 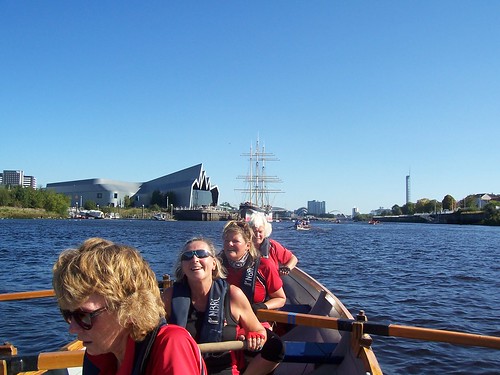 So 2 hours in, coming past Braehead shopping centre I can see the top of the masts of the Glenlee. There was a lot of groaning in pain, then back to focusing on catches and relaxing forward. The stroke was long, slow and damn strong, on the last stretch towards the finish we reeled in about ten skiffs. How were we managing it? The momentum kept coming, we caught St Baldred just at the BBC building to cross the line at Finnieston in 2 hours 45 mins. What a row! We drifted a lot of the way back to the retrieval slip, tired, but so chuffed too. It  was not easy to get out into a standing position. Blister checking....ouchy. 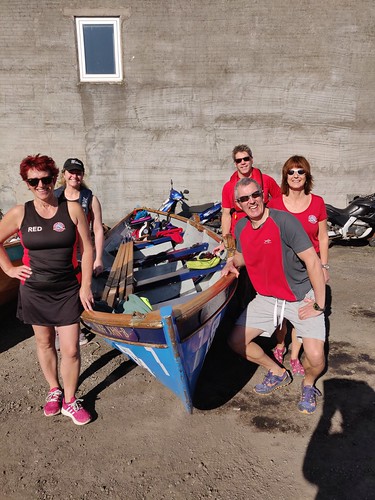 Huge congratulations and 6th place in the open mixed category, so amazingly fought.

An excellent festival followed  with toe tapping music. Clydebuilt put on a really interesting array of stalls and the food and bar were well attended. The last three standing or dancing at the ceilidh were Vik, Ann and myself, much to our delight. We knew what we were doing was helping along the gig rowers.  What a fabulous day. 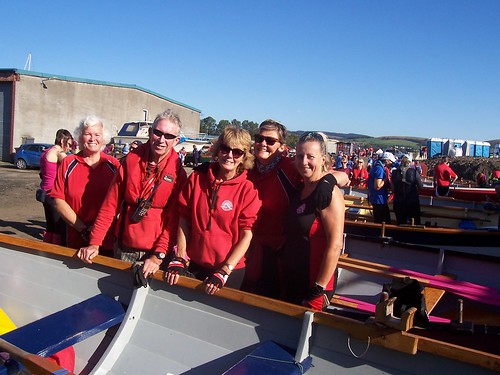 Sunday dawned.  Good grief, what happened to the weather? Thunder boomed overhead and boy does it know how to rain through West. 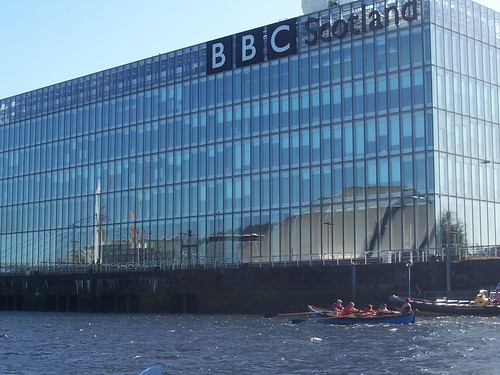 Red skiffies were not looking very cheery, supporting blisters, bruised and tired, and now soaking. Dragon Boat racing, whose flaming idea was that?

Vik, Ann, Sheena, Lou, Laura, Dave and myself were joined by Arran skiffies David, Emma, Steve, Cil ( who'd even dyed her hair red for the event much to Steve's disgust) Fritz, encouraged by a poorly Stuart. Our Broughty pals, Liz and Kate finished up our crew. Like drowned rats we were trussed up in buoyancy aids, handed little paddles, given some tips, the main one being "no capsizing", and we were off.

Nine teams took part, some very fit looking, one certainly had done it before. Three dragons at a time paddled the 160 m alongside the Glenlee. Our first race took 85 seconds, and left us even more soaked....we swapped about as we only had ten paddlers at once and with a drummer for beat on stroke too. Lou and Laura looked really great holding on tight with their thighs on a really precarious seat in bow. Our times got better with every heat. The slowest of the three was taken out and the other two added together. And we were in fourth place - YEEHA!, the sun was coming out, folk were enjoying it, and smiling too, crowds were shouting, what a great afternoon.

The semi finals saw some poaching of team members to help Ben (organiser of Castle 2 Crane), beaten by a second, by red skiffies. OMG!, into the final!  Tactics were formulated, seating, best stroke, beater, and then the tension as logs were removed from the race area. And they're off, and gosh there wasn't much in it at all. Great battles, more friends made, and such a great crew! A fantastic event highly recommend to others for next year.

The journey home was thankfully a lot quicker with baths and early beds at the end of it.Here's to next year, thank you to all the volunteers and organisers, and to the towers too. An oarsome weekend. 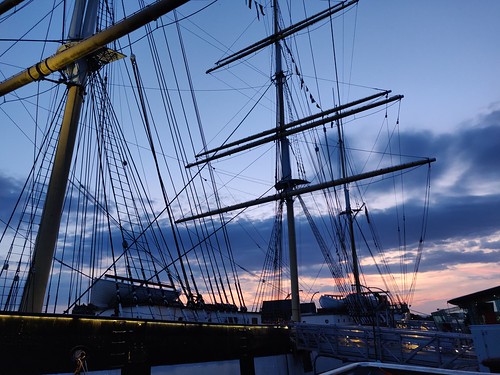 The North Berwick coastal skiff rowing regatta 2019 – the best yet!

What a day - wall to wall sunshine and not a breath of wind - conditions could not have been better. 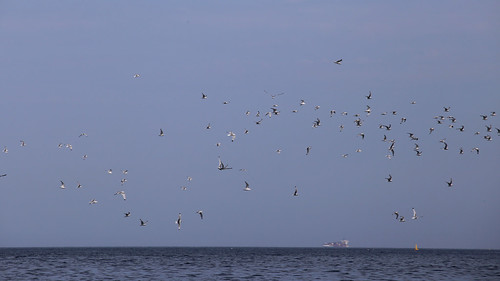 There was an early start with a 7 o’clock meet to get the ribs out to lay the buoys and check  that there were no creel lines that could snag the boats.  Clive and Finlay were already looking a bit overdressed in dry suits. 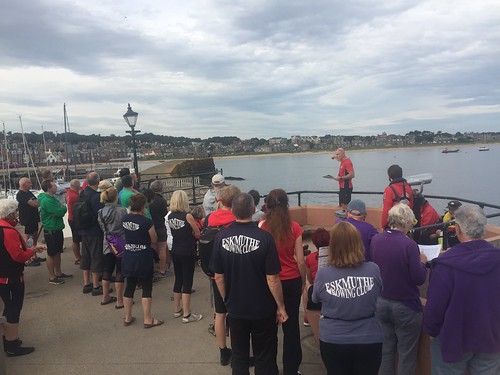 So what were the highlights of the day? A few things really stand out.

One of my personal highlights of the day was the opportunity to help out on the water with Finlay Robertson showing me the ropes on the rib. I had absolutely no idea what we were doing but (I think) I managed to look quite officious and had a blast zooming around the Craig. Thanks Finlay maybe next year I’ll be semi-helpful. 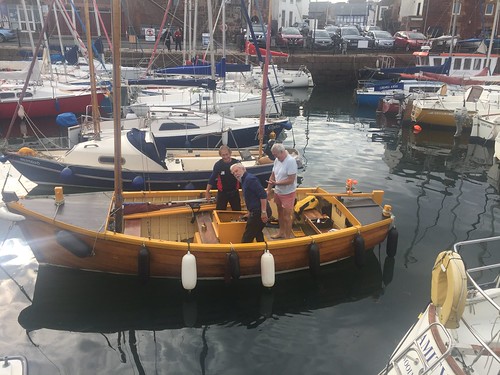 So what else is worthy of a mention? Well the catering must be talked about. Meg, Ann and the team did a wonderful job.  The catering was terrific throughout the day, and, of course, is such an important fundraiser for the club. The standard of catering was quite outstanding.  Pretty early on I concluded that my cheese and pickle rolls were okay but they didn’t really compare to my favourite role of the day.  This was humus and sun-dried tomato on a freshly home-made sourdough roll – outstanding. 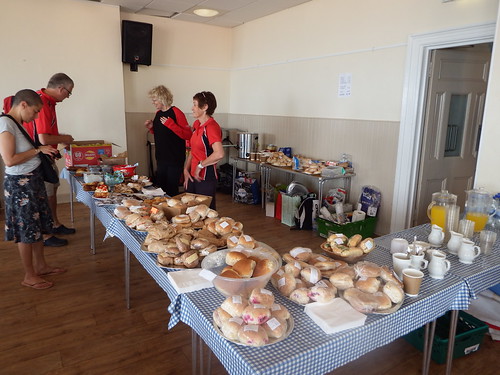 A review of the day would not be complete without a mention of Messers Baird  and Rooney on the tannoy. Their inane ramblings were quite wonderful entertainment and I understand the new weekly podcast will be coming out later in the year.

So what about the rowing ?   Lots and lots of terrific rowing in wonderful conditions with some really fast times. All races were keenly contested and it was great to see a spread of medals across all the clubs. 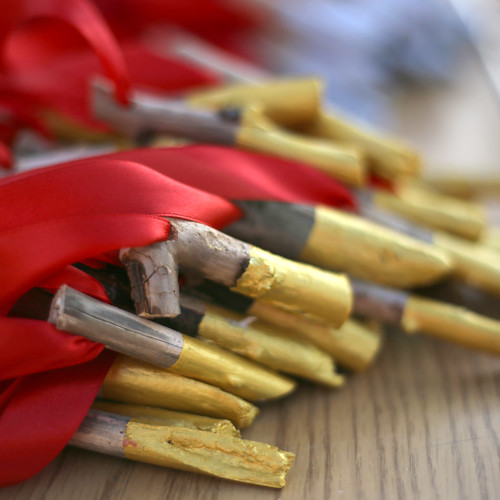 At the end of the day we all gathered for a cold beer on the beach and a chance to listen to one of Sandy’s monologues - which never disappoints.  All the medal winners were delighted with their unique medals (way to go Milly) which were a terrific memento of a wonderful day on and off the water.

Back To Where It All Began

Tuesday last week I welcomed 8 Eyemouth rowers to have a wee row in our skiff John b and try out our oars.

I first met Alison when escorting the Eyemouth gala queen from St. Abbs and enjoying their hospitality in a party afterwards.
We borrowed their boat Seabreeze for a month or so in 2012 , after St. Baldred was damaged in the big storm.
We had a lovely couple of hours in and out the bay, along the west passage and out to the Craig. They were amazed at how many puffin puddles we had. And thoroughly enjoyed rowing the John B. The sun shone for us to have a wee picnic on the beach after, supported by the lovely Tracy and Claire.
So lovely to also be presented with a gorgeous bunch of flowers on my return home. 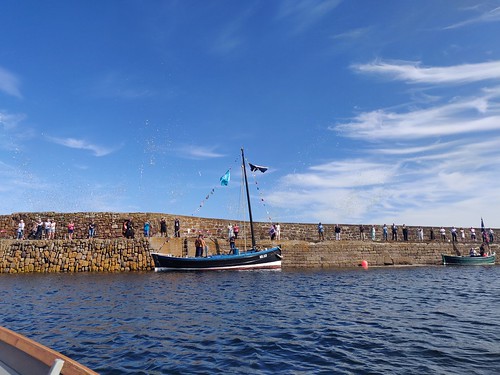 Click for album
Then on Saturday the 3 amigos set forth with St. Baldred in tow on another bright warm day. Picking up an eastern lass (Patsy) on our merry way to anster where St. B. was first launched on 28 May 2010.  This was the first getting together of skiffs and with the paint still drying and a space hopper for a Cox seat, the fun began. Six merry starter clubs, porty, boatie, Coigach, Ulla, anster and NB, a lot of oar thrashing and racing fun started off our amazing life changing sport for many communities. 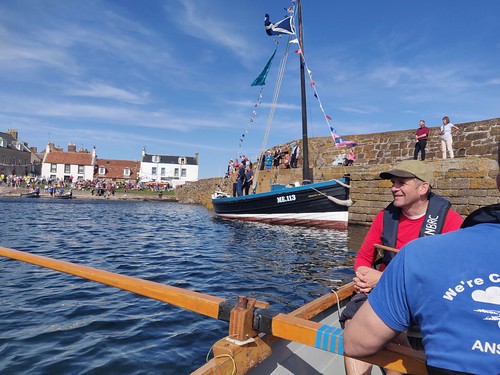 Click for album
So launching at anster with a stash of pies and cakes, we rowed down to Pittenweem to hand over our St. Baldred pilgrim token to St. Killian, a fifteen foot high puppet, which was then carried all up the coast. The Pittenweem skiff then delivered the wreath to fruitful with the soon to be Cellardyke queen, Ellie Deas. Rowing back up the coast practicing our lay back , trail oars and recover to be used later...there was mention of the red mist descending on more than one boat  but a lovely long rythmatic stroke took us back to anster to retrieve the bishop and St. Ayles chaps aboard the home skiffs
We managed to grab a stow away (Lynn) as has been history for us from NBRC on the east Neuk side. The wind and waves having got up and with our stowaway, we needed a handicap system to see who benefitted. Three oars on each Fife boat with a passenger..
Onto Cellardyke and our practiced moves, an empty harbour of boats, the music bellowed out and cheers from a few hundred towns folks. The crowning of Ellie and throwing our oars in salute. Before 50 volunteers set off confetti flares , very striking against cobalt skies. Back on up to lay the wreath and model boats in commemoration of all those who'd lost their lives at sea. 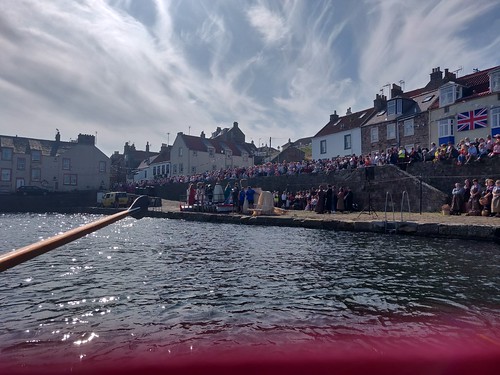 Click for album
The water was certainly whipping up as we returned to anster again where Crail were just changing crews to row back up the coast on training. The day was polished off the toasties in the sun before getting back to NB again.
Very proud to have been involved and such an amazing day. Richard from anster, put in a huge amount of work to get this all working seamlessly. And to our Robbie for getting us all together.
Jacque Turner