We came, We saw, We got mostly second

Crail as it happens! Mens and ladies over 40s and novices came second to them.

Long wait 'till final races where we were victorious in the mens open and "keys in the basket" category.

Thanks to the towers, special mention to the superb novice crew and our resident cockney who kept emailing everyone until the crews were sorted. 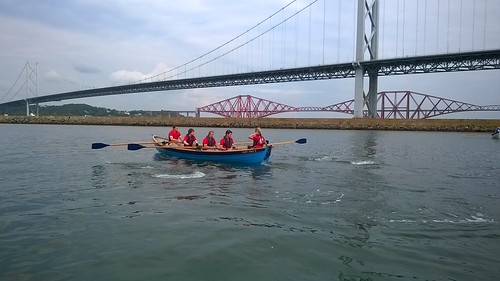 We hosted our 5th regatta at North Berwick on 23rd August  and we were blessed with pretty much perfect conditions to provide a real challenge to both rowers and coxes around the 2 mile course.

We were delighted to welcome new clubs Islay, St Andrews and Eskmuthe, as well as   familiar friends from all over Scotland, with 12 clubs in total competing in the races. 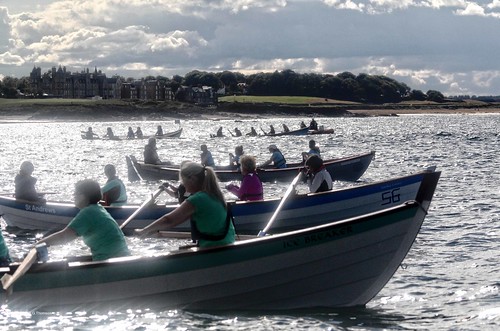 The racing was tough following the usual 2 mile course around Craigleith. The conditions were challenging for both crews and coxes, an incoming tide in the morning being countered by an at times stiff Westerly breeze made the back of Craigleith interesting. The sea bouncing off the rock required a tough call on the coxes as to how close they could go to the rock.

In the afternoon with the tide going out and the wind still coming from the West the coxes were challenged to steer a course taking into account the significant Leeway. 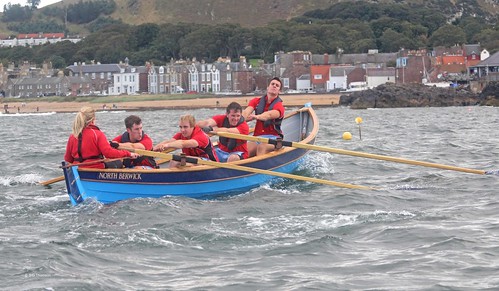 The Men's 40+ kicked off the day with Coigach, Crail and North Berwick in a dogfight the whole way around the course before Coigach surged at the last to take the win.

A pod of dolphins joined in the Mens 50+ and swam in front of Crail just as they were finishing their race.

The U19 race was run as a handicapped event to allow different mixes of boys and girls to compete. The Newburgh young lads were fastest around the course, but the mixed crew of North Berwick won on handicap.

Islay's open men were heroic in winning Bronze despite breaking an oar, they improvised by putting two men on one oar! (see photo).

Closest finish of the day, although they didn't know it because they were in different waves, was North Berwick open ladies pipping Portobello by 1 second.

Many thanks to all those visiting clubs who came, and to all the members of NBRC who helped host the day.

Newburgh rowing club held their regatta on the Tay on Saturday. It was an exciting and challenging race course with strong head winds and tides, lining up on the start line was not easy, but the coxes all did really well steering through the 1.3km course against the elements. Crail described it as rowing through concrete at times.

There were five clubs , Newburgh , NB, Crail, Anstruther and N Queensferry  and 10 race categories, NB entered 8. Throughout we had a superb entertaining commentary from Newburgh's finest voice whose services Jacque may have secured for our regatta. 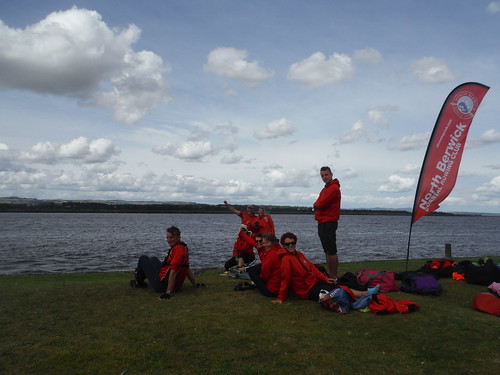 It was a delightful atmosphere, we were made to feel very welcome and spectators sat on the grass in the sunshine right by the finish line.

NB did really well, all our rowers came back with a rosette or two, or three, or more. We won the women's open, mixed open, 40+ men, 50+ mix and decades categories (thanks to muscle-popping Alan from Newburgh) and also helped other clubs win medals. Some of these wins were by little more than a second ahead of Newburgh ! We received huge orange and black rosettes in the prize giving and an even larger rosette for most successful visiting club.

Comedy prize must go to Norma for stepping off the jetty not realising the river was still deeper than expected, so demonstrating to all her swimming skills (aka doing a Phil)!

It may have been a small regatta, but the competition was fierce, we rowed our hearts out and every race was hard fought.

It really was a grand day on the Tay.

An ever-hopeful and enthusiastic group of 31 North Berwick rowers, family and friends and the Skiff John B made their annual pilgrimage North to the Ullapool regatta on the 11 and 12 July. After the amazing success of last year's inaugural World Championships hosted by Ullapool we were keen to return and sample their highland hospitality and perhaps win a few medals. We were not disappointed.

Spectacular Loch Broom looked stunning and the sun shone for us on the first day of racing. On the shore 20 skiffs were lined-up and last minute preparations got under way. The participation this year of several new clubs at Ullapool is an indication of the speed at which Scottish Coastal rowing is growing. The wonderful Cornish gig Energy made its long journey from Falmouth to attend the regatta and some were lucky enough to experience a different type of rowing.

Racing commenced on the Friday and North Berwick's first medal of the day was won by a very slick women's over 50s crew. This was followed by a convincing win by last year's World Champions, a superbly-fit over 60s mixed crew, who retained their title leading from start to finish.

Saturday saw another great day of racing. The sun had gone but conditions were still ideal for racing.   Our first gold medal of the day came from the over 40s men's crew. This race was gallantly fought between North Berwick and Anstruther almost neck and neck to the finish, before North Berwick pipped it. What a race!  We had high hopes for our 40+ mixed crew but a broken pin at the start meant that the race was over for us. This left our open ladies crew without a boat for the next race. While repairs were expertly carried-out by our father and son team of Phil and Findlay, the superb Coigach rowing club kindly offered their beautiful Lily Rose to enable us to continue. This was a tough race with the Anstruther girls winning gold, followed by Crail and North Berwick winning bronze - not bad really considering.  Two of our young members, sisters Isla and Heather picked up another medal in the under 19 composite crew coming in second behind Coigach. 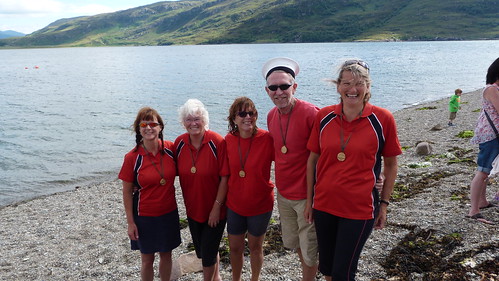 
The final race of the day was the men’s open which turned out to be another really exciting event.  Our young, strong and well-toned crew fought gallantly but were very narrowly beaten into 2nd place taking silver.

Ullapool won the honours of the weekend finishing first overall. In spite of our medal tally and gallant effort we finished in fourth place. However, any rower will agree that winning is a small part of our sport. Friendships forged, camaraderie and the joy of being out on the water make coastal rowing what it is - amazing!

This is all incidental for two NBRC members. Finlay surprised Elisa by proposing in the place where their relationship was kindled last year at the World Championships. The happy couple are now engaged and we are thrilled for them, and wish them all the luck in the world.


Our sincere thanks to Ullapool Coastal Rowing and community for another tremendous regatta and evening ceilidh.  Thanks too to the Ullapool Pipe Band, to Craig and Robbie for towing our beloved skiff and to the captains Claire and Craig for keeping us all happy.

The weekend of 27/29 June saw the Scottish Traditional Boat Festival in Portsoy and our thanks go to Jo and Clive who towed Skiff John B up on the Thursday. Their efforts were to be richly rewarded, as, not only did Clive find himself coxing Olympic Rowing Medallist, Katherine Grainger as she tried her hand at skiff rowing in John B, but also, Jo managed to secure an autograph on her life jacket….so now she’ll have to take it off before she falls in any water!


A small but determined contingent from NBRC set off in high spirits at various points on Friday to reconvene in the tented village on the school playing fields in Portsoy. After a long journey north, beset by end of term traffic it was wonderful to see the rowing club flag fluttering bravely in the ever strengthening wind!! Our advance party, Jacque and Louise had done an amazing job setting up camp for us and we set off to the harbour area to reconnoitre the rowing conditions for the next day.

As night fell, the thickening cloud cover, strong winds and huge swell with more white horses than the Vienna Riding School meant that things were not looking good for Saturday’s race programme. Sadly, our fears were confirmed at the coxes’ briefing. The official race programme was to be suspended and replaced with a timed “bo-ssage”-type event in the inner harbour. Even getting the boats to the inner harbour was a challenge not for the faint hearted as it involved rowing across the mouth of the harbour where massive waves were pouring relentlessly in. For the sake of Phil’s emotional well-being we decided not to subject John B to the indignity of potential bumps and bashes off the harbour walls and slipway and so we prevailed upon the generosity of Portsoy who were happy to lend us Soy Quine to show off our manoeuvrability skills(!) With much turning on sixpences and backwards rowing, dodging the beautiful traditional boats which were visiting for the festival, our womens’ and mixed squads put in very creditable performances before repairing to the beer tent!

Our disappointment at not being able to row was offset by the vast array of festival activities in Portsoy and despite the high seas, the weather stayed dry and we were able to appreciate the lovely harbour- side town, enlivened by music, dancing, and the high spirits of everybody who was there. Portsoy Rowing Club had done an excellent job welcoming the 15 clubs who had come to row, particularly in light of the unhelpful sea conditions.


Sunday brought little change in the state of the sea and, although a limited programme of racing over a much shorter course was proposed, as we watched the safety boats literally disappearing into the troughs between the breaking waves we reached a consensus decision that the conditions were not raceable. The more intrepid among us took John B out for a social row and friends in other clubs were able to offer a row to those who were keen to race.

As is always the case, whether we race or not, a weekend with NBRC is unforgettable for the friendship, fun and team spirit which are the cornerstones of every club activity. This weekend was no exception.