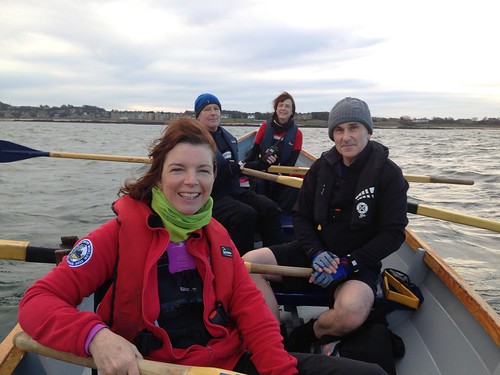 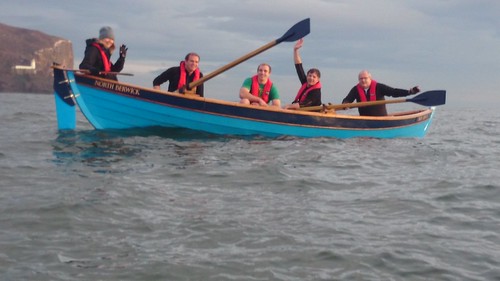 Lovely October Sunday morning, NBRC took two St Ayles Skiffs and a Haningfield three seater out to Fidra for a leisurely row where coffee and cake was served in lieu of breakfast. 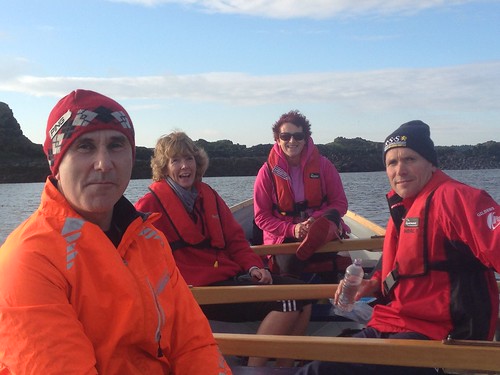 Apparently there were dolphins close by, but I didn't see them, so may as well claim that we saw Kelpies.

Whilst the Tiger Cup was going on in North Berwick with our St Ayles Skiffs, NBRC was also represented at the Nith Navigation Race (Dumfries) by the Wightman family rowing a double sculled skiff. The race is a six mile journey up the River Nith from Glencaple up to White Sands in Dumfries town centre.  Crews enjoyed the delights of the Caerlaverock Tearoom on Glencaple pier as they watched the tidal bore moving up the river.  There was a bit or drizzle as the crews boated, but the water conditions were flat with a decent tidal current helping the crews up the river.

North Berwick’s double scull Speedwell was first off the start, with crews joining in at 30 second intervals for the time trial event. Royal West’s class 2 Jolly Boat "Sprite" was built 120 years ago, and this was her first race for around 15 years.  She is longer and sleeker than the St Ayles skiffs, which perhaps thrive in slightly livelier conditions.  As it was Sprite managed to overhaul all the other boats on the course, apart from the North Queensferry Skiff.  Sprite completed the course in 43 minutes and 15 seconds, a new record for the course, and was recorded as reaching a (tidally assisted) top speed of 9.8 miles per hour. 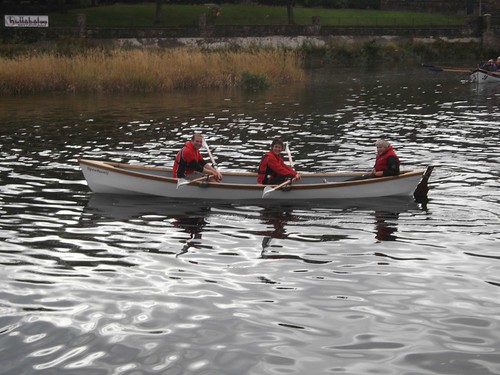 Being pushed the whole way helped the North Queenserry Boat to a win in the St Ayles skiff class, and they were presented with a quaich to take home to Fife.  As ever the prizes for the event were fantastic, with a bottle of SCRA whisky for every finishing crew, and a selection of cheeses for the every crew, but special cheeses for the fastest overall crew and for the oldest crew to complete the course (Troon).  As a first, at the prizegiving barbeque, the first SCRA conker knockout championships was held, won by Susan Wilson from the local town of Annan, who have a skiff ready to go on the water, and hosted an excellent harbour festival event in May.

NBRC finished the race season with an internal competition racing around Craigleith in the Tiger Cup (now more of a concept than an actual trophy since the real one has been mislaid). Crews were balanced, and a handicap system applied to ensure that all ages and genders could compete on an equal footing.

Six crews of mixed age and experience entered. The race format would be a Time Trial around Craigleith, with times being adjusted by a handicap system to determine the winner.

A stiff Westerly faced the first two crews which really bared it's teeth after the half way point, when the crews came around Craigleith to hit the wall of wind that made progress tortuously low as each stroke moved the boat only inches at a time. The crews battled through this for 2-3 minutes before they broke through the wall and were able to get back into their stride to complete the course.

The wind did drop a bit for the successive two races, meaning that the first crews were unlikely to win the race, unlucky for them! 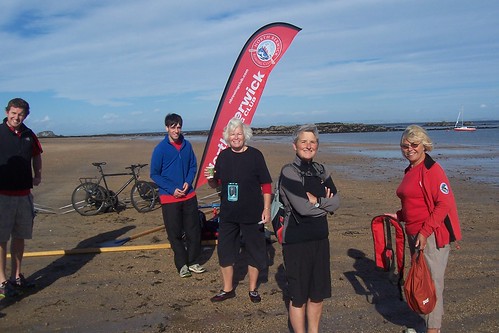