The local Rugby Club retained NBRC’s Trades Cup on a fantastic evening of rowing off North Berwick Harbour last night.  The Trades cup is a community competition open to any local organisation, trade or group, with the crews made up of complete beginners to rowing, but with an experienced coxswain/ coach provided from the rowing club. 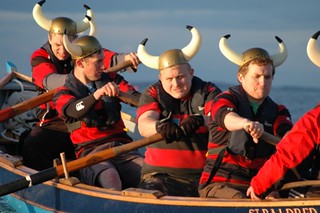 The Oval Ball players had seen off a team of Firefighters on their way to the final.  They faced a team of Homeworkers in the final, with a handicap system giving the homeworkers a 12 seconds start..  by a coincidence the exact difference between the times the two teams had registered in their heats.

Before that, in the Little Final, the Firefighters overcame a team of  Skateboarders from local community project "theSpace", with the Space men using the event to raise funds and warm up for a 10,000 km charity trip to Mongolia.

In the Final the Rugby players were down going into the turn, but managed to pull away from it half a length up, a lead which they extended as they headed for the finish.