Rowing of the Marches

Musselburgh’s Riding of the Marches is a local tradition which goes back over 300 years where, once every 21 years, a procession of locals many on horseback travel around the old town boundaries cutting turfs and declaring ‘ It’s a’ oor ain.’ This year’s event is on Friday 29 July.

Eskmuthe Rowing Club decided to replicate the event on the sea and invited other clubs to join them in a flotilla to visit the two boundary points at each end of the old town. Last Saturday evening we were part of a fleet of 13 skiffs, from as far away as Amble and St Andrews, in a 5 mile figure of eight shaped course from Fisherrow Harbour. As a warm up we all took part in a tug’o’war competition which we aquitted well in the first round then literally fell away when we didn’t get our timing and catches right. 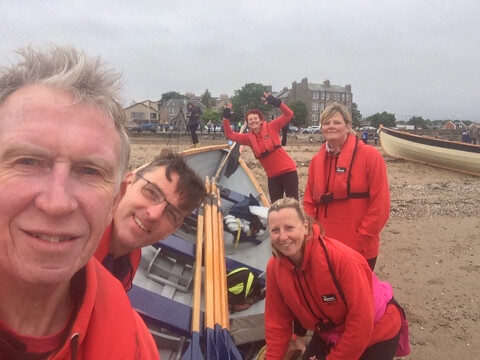 The main event had the thirteen skiffs saluting the Town Champion with vertical oars before setting off west to the first buoy where we all shouted ‘It’s a’oor ain.’ We then turned eastwards past the Levenhall lagoons into the fierce northeasterly in a chop and rolling swell we’ve been accustomed to recently at NB. Another shout and the long stretch back was completed in a total time of about an hour and a half. This was not a race but we were back first. Pippa M, Ann H, Medium, Sandy and Red with St Baldred represented NB and were delighted to support the local club

Because of the miserable weather conditions and the slippage in the timetable, the planned sprint races were cancelled and we retired to the BBQ, bonfire, live music and socialising with old friends and new. We’re sure Eskmouthe will see this as a very successful event which will almost certainly be repeated and developed.