A sizeable squad of North Berwick rowers made the annual pilgrimage to the seemingly perennial sunshine of Ullapool this weekend and emerged victorious having won the overall club shield for the very first time! 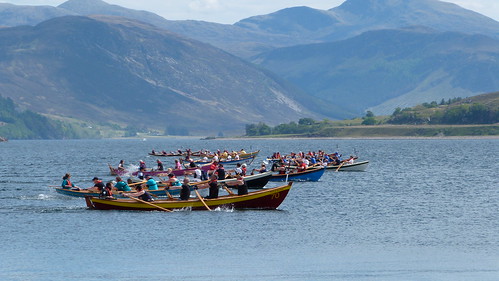 As ever Ullapool Coastal Rowing Club ran a fantastically well organised and thoroughly enjoyable regatta with races taking place on the same form of 2km course that will be used at the World Championships in July.  Both days of racing enjoyed beautiful weather (for those with no fear of jellyfish or hypothermia it was even hot enough to go swimming) and conditions for rowing were excellent, although the waters were more challenging past the headland and out to the turning buoys.

With nearly 40 rowers in 20 categories, this regatta was an ideal opportunity to show NB’s strength and depth, and the club did not disappoint.  Every single crew pulled their hearts out in hotly contested races, each placing proved crucial with NBRC winning best club by just 2 points.  A special mention goes to our unstoppable 60+ ladies (including Patsy from Eastern) who were presented with the commemorative Rose Bowl for their victory on Saturday.  I should also congratulate our juniors who were unceremoniously bundled into last minute composite crews and did the club proud as well as securing much needed points.  Several of our rowers, not content with winning medals for NBRC, generously helped out other clubs with empty seats and bagged yet more silverware, including Big John’s first 60+ gold…..shame it was for Crail!

The ceilidh in the village hall was a really excellent bash, although holding it on the Saturday night was obviously a flagrant attempt to nobble those of a dancing persuasion who had to row or cox the following day.  Luckily the iron constitutions of NB rowers were unaffected by such a night of jollity.  The young band were superb, Lisa from Ullapool taught us a Gaelic rowing song (which I’m sure we all remember) and, for reasons best known to himself, a kindly gent sang us something in Chinese [The national anthem, I believe – Ed.]. 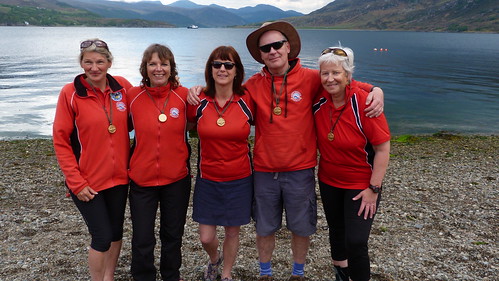 Once again much of the fun of the regatta was to be had in catching up with friends from other clubs and having spent time chatting with rowers from Coigach, Ulla, Anstruther, Crail and the newly formed Eastern, the general consensus was that the standard of rowing across the board had really improved which made the races exciting and competitive. 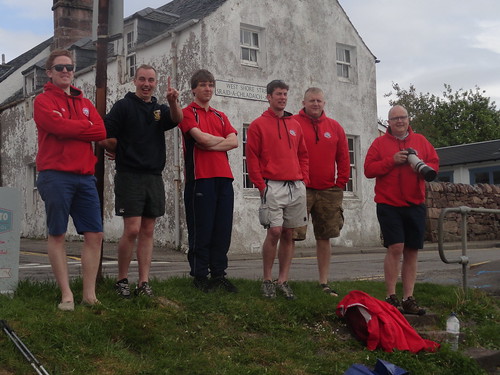 Huge thanks to all those who coxed their crews so superbly, the bosuns for getting Skiff John B repainted and the new lifting rudder attached in record time, Dave for getting the oars looking ship-shape, Hugh for towing, Clive and Issy for working on the safety boats (particularly on her birthday!) and everyone who came to support the club from the shore (I think Rachael eclipsed everyone in the shouting encouragement category).  It was a really wonderful weekend and I can’t wait to go back again next year!  Well done NB!