When most of North Berwick were still tucked up in their beds, ten mad souls dragged themselves to the harbour for the first, of hopefully many, captains' coffee and cake social rows.

The bells were just chiming 8 when we launched into a fantastic morning sea. Going out the West Passage at just after full tide we got our first sighting of the dolphins just off the rocks. Totally amazing. Our two boats followed to The Lamb where we appeared to lose them. On through to Fidra where we landed and climbed to the topmost point. Views were stunning, but I think it's fair to say the cakes were best. You could have heard a pin drop as we all munched and drank coffee admiring the views and the dolphins between us and the shore. After our well earned rest we started our descent. We were trying to ignore Alan as he wandered off for some peace.... but were all surprised when he arrived back at the boats, in a pirate outfit.....strange things happen at sea. What a guy. 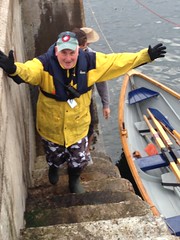 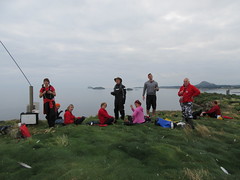 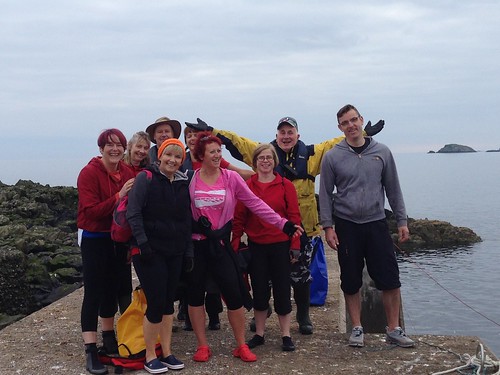 It was a bit of a stretch getting back into boats with the tide falling. Boats were backed out again from the little harbour with fantastic skill, and we started the lovely row home. Landing back on the beach as the clock struck 11. A superb morning with an excellent wee gang. Come join us next time, watch for the shouts, where will we go next time??