After calling off the Tiger Cup earlier in the year due to storms, we grabbed the good weather window yesterday to have a quickly arranged internal, friendly knockout race competition that I'm sure would make the founder proud. Twenty red shirts gathered on the beach for what turned into a lovely day, the aea state was pretty good with a light swell, almost full tide, and very little wind.

Names were drawn from a hat (red carrier bag) and teams picked their coxes; John B and St Baldred were raring to go. The first two crews headed out for a warm up to the front of the Craig, as others gathered above Galloway's Pier to watch or tended our wee beach fire. We had four teams racing and a fifth full of youngsters having a jolly. The races were all very closely fought neither boats winning by more than a boat length. After the first two races we had a wee break to get the youngsters out. 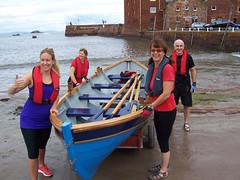 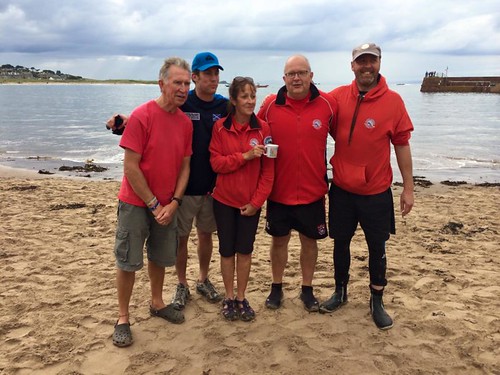 The final was then under way. Lou, Dave, Lizzie and Sheena against Simon, Ian, Sandy and Steve. Again it was very closely fought out, with almost a girls team against a boys, (sorry DD) so really if the handicap had been in situ.......??!!

Well done to the boys, who were Tiger Cup Winners 2015. Marshmallows, chocolate bikkies, and cake to polish off the afternoon. Thank you to everyone for putting your oars in and pulling hard, what a great afternoon.