Saturday 1st August saw a small group of NBRC members head along the coast to Musselburgh to take part in Eskmuthe Rowing Club's second skiff regatta. Other clubs present were Port Seton, Row Porty and some representatives of Amble Rowing Club who were using one of Eskmuthe's boats. 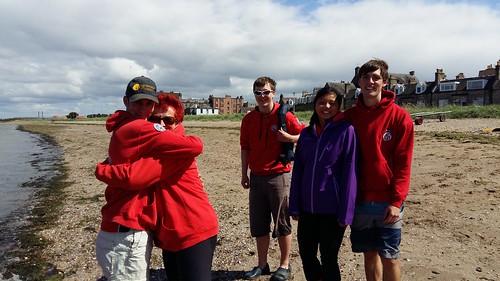 The racing kicked off in the early afternoon. The course was a race out for 500m to a line of buoys and then back again to the beach with each club having their own lane for the duration of the racing. Whilst the start of the races was fairly sheltered, by the time the boats got out to the buoys the cross wind became an important factor, making for some interesting buoy turns! The first race, the mixed open, was won by Port Seton in Boatie Lodge with Skiff John B  coming in second. Port Seton won again in the mixed women's race with Skiff John B coming in third. Special mention has to go to Norma and Sheena who rowed in consecutive races. The third race, the mixed men, saw North Berwick get their first and only win of the afternoon by 0.9 of a second from Port Seton. The heavens opened during the course of the Decades race, which was won by Port Seton with Skiff John B coming in second. The weather had really deteriorated by this point so everyone decamped to the warmth of the yacht club in the hope that conditions would improve. Eventually it was decided that one more race would go ahead, the pick and mix. Following the pattern of the afternoon, the race was won by Boatie Lodge with one rower from Port Seton and Amble and two from North Berwick.

Following the racing there was a tug of war competition with teams of four men and three women from each of the various clubs. Despite our best efforts North Berwick were beaten in the final by Row Porty.

Everyone from Eskmuthe Rowing Club was very friendly and welcoming, especially the three young girls who manned the refreshments stall and were fantastic at selling their produce. Add to that a few beautiful medals made from left over wood from the building of Eskmuthe's new boat, Steedie Falconer, and I can safely say a great afternoon was had by all.