“Four oars will quickly steep themselves in night;
Four rowers will quickly dream away the time;
And then the skiff, like to a silver bow
New-bent in heaven, shall behold the night
Of our solemnities.”

Those five lines set the scene for our Summer Solstice adventure on the 21st June 2015. At 3.30am ten not-too-awake NBRC members met at the Dinghy Park to prepare Skiff John B. and Blackadder for the club’s first ever Midsummer Night’s Row. 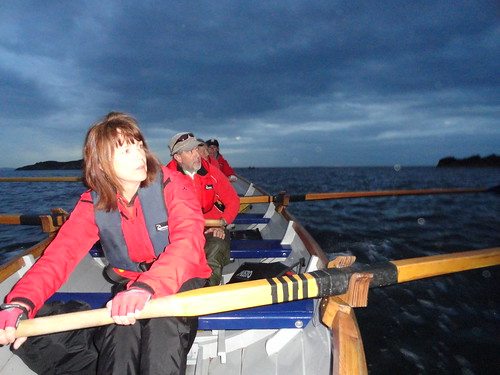 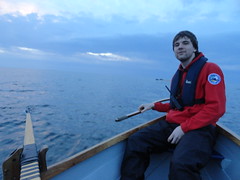 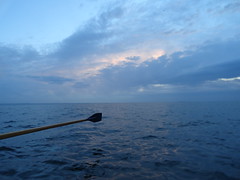 At exactly 4.00am the two boats left the sleepy shelter of North Berwick harbour and headed towards the Craig. A guillemot nearly joined Skiff John B.’s crew, but decided at the last second that it wasn’t up for this kind of morning exercise and took off without a glance back. On the “dark side” of the Craig, two enchanted crews watched the sun rise through a layer of clouds and felt the mystery of summer approaching.

The fearless journey of the Don Quixotes continued into the teeth of a building sea. The intrepid wanderers sought shelter in the lee of the Lamb and, after a fiery exchange of views with a lobster pot, the boats rafted and rode to a single anchor.

After feasting on Manna and honey wine (okay, coffee and cakes) our heroes were ushered by the winds back towards the safety of their homeland. After defeating a final tempest on rounding the Craig on the last leg of the journey, the expedition made it safely back to shore.

It was 6.00am, and the town was still sound asleep.