Last Sunday saw a substantial North Berwick regatta squad making the short trip to Dunbar. With two excellent performances under their belts, could the impetus be maintained in the run-up to the worlds? 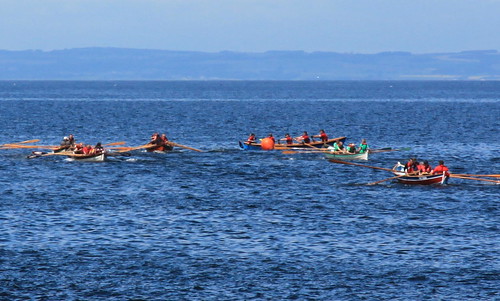 Well versed in the ways of the Dunbar regatta, the NB squad arrived equipped with waterproofs, exposure gear and thermal blankets and were nonplussed to be greeted by cloudless skies, gentle winds and a sea on which only the slightest swell could be detected. Adaptability is the North Berwick watchword fortunately and in short order, many layers were cast off, copious amounts of factor 40 applied and the serious business of racing the 8 other competing clubs, two of them from south of the border, began.

First up was the men's open resulting in the closest finish of the day with Newburgh and North Berwick unable to be separated until the last stroke of the race (which the North Berwick crew weren't able to take for reasons we won't go into here). This success was a premonition of things to come with Newburgh taking first place in three out of the first four races, their run being broken by the Anstruther ladies who were victorious in their open event. Our crews were not shamed in any of these events with our open ladies matching the men with another silver, our mixed open crew coming fourth behind a dead heat for second place between Portobello and Anstruther and most impressively, our fresher crew, none of whom has yet seen their 17th birthday, scoring a superb third behind the adult crews of Newburgh and Anstruther. Hearty congratulations to Cameron, Euan, Eve and Isla for this great performance.

So far the NB crews had performed well but gold medals had been conspicuous by their absence. All this was to change as North Berwick crews triumphed in three out of the four afternoon races winning the women's 35+, men's 35+ and mixed 50+. The over 35 ladies are particularly worthy of praise since the entire crew had blown out the candles on their 50th birthday cakes. Issy overcame a bad bout of food poisoning to stroke the mixed 50+ team to a fine victory.

Sadly, these achievements also demonstrate a lack of appreciation of the difficulties faced by the club captains in finding crews for races. At least three club members, Norma, Sandy and Yolanda, rendered themselves unavailable for novice crews in future by winning their first race.

And so we came to the last race of the afternoon, the gruelling long distance slog round the Belhaven bay poo buoy. Once again, the North Berwick crew turned in an admirable performance lying 4th at the turn but reeling in Portobello and Newburgh on the way back to finish a close second to Anstruther who set a new record for the course.

The prize giving was notable for the quirky array of trophies presented to the winning teams. Sadly, the rumoured scale model of a St. Ayles skiff for the top club failed to materialise since North Berwick would undoubtably have carried it off. We failed to achieve a podium place in only two out of the nine races and three golds, three silvers and a bronze is a highly respectable performance in anyone's book. Our thanks go to Dunbar for a superbly organised and highly enjoyable regatta. Next up, the Worlds. Here's hoping for an equally successful outcome.