Just when you think that the regatta season is over and you can take a brief respite from the gruelling training regime to which you have subjected yourself, another one appears on the calendar (and indeed in Callander). So it was that the Scottish Coastal Rowing community loaded their boats on the trailers once more time and headed for the shores of Loch Venachar for the SCRA freshwater sprints. 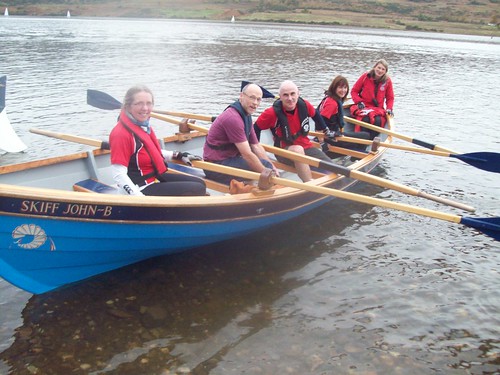 The start of the event was delayed slightly since those rowers unwise enough to rely on their satnavs to get them to the event ended up on the wrong side of the loch but eventually all the attendees were assembled in the splendid wooden clubhouse of the Loch Venachar sailing club (to whom big thanks are due for hosting the event) and the racing could begin.

Since this was a sprint event, the course was a short one, roughly 500 meters with a Worlds style buoy turn halfway along. The brevity of the course allowed a lot of races to be fitted in and led to many exciting close finishes, not least in the novice mixed final where there was a three way tie for second place between Crail, Rowporty and Queensferry. A total of 15 skiffs turned up and it was a pleasure to see new clubs like Catterline and Eskmouthe taking part in their first regatta and being welcomed into the skiff family.

In the morning the event heats took place with North Berwick qualifying easily in all the events they entered. At the lunch break, we were leading Newburgh in the overall competition by 2 point and with all to row for. At lunch, entertainment was provided by tossing a couple of brave skiffettes into the water and then hauling them out again. Joking aside, this provided a very useful demonstration of how to recover people into the skiffs and every rower should take the opportunity to watch the videos of these demonstrations once they become available.

With the educational aspect of the event over and the threatened rain still holding off, it was time for the finals. Could North Berwick fend off the novice (and considerably younger) challengers from Newburgh and put the magnificent trophy on Dave's mantlepiece?

Well, we did our best, especially Sheena who was hardly out of the boat all afternoon, and we scored notable victories in the ladies intermediate and under 19 events (albeit with the assistance of Jess from Crail and Brandon from Catterline, for which many thanks, in the latter event) but at the end of the day, we were pipped to the post by a mere two points. Hearty congratulations to Newburgh on their well-deserved victory. The full results can be found here.

With the racing over and the boats put away, the long overdue rain finally put in an appearance and the prize giving ceremony was a somewhat damp affair. With this concluded, it was time to head home, reminisce about what has been a truly outstanding 2013 season and begin anticipating and planning for the 2014 season. This was a fabulous way to end the season and congratulations are due to all who organised or took part in it.