Pleasingly, many of the other clubs won silver and bronze medals. It was also good to see eight boats in the 60+, as a result of relaxing the entry for this event to average age rather than minimum age.

A few of the races were won convincingly but others were very close. 7 seconds covered the first three boats in the men’s 50+; 6 seconds for the first three in the men’s open; and closest of all, 6 seconds for the top four of the mixed open. Very small margins in nearly 20 minutes of rowing. And very painful. One of the best performances was from NB’s novice crew who rowed through South Queensferry from two lengths down, with Eastern chasing hard the whole way. What an exciting way to win your first race.

I should also report Broughty Ferry’s discovery of a new land mass behind Craigleith, on which they perched their boat while attempting an overland route in the women’s 40+. It is possible the SCRA race rules need to be amended to deal with porterage. 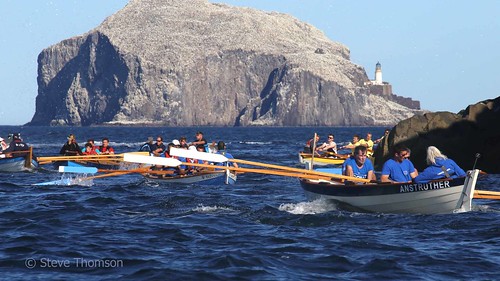 Once again the Hope Rooms were the hub of the regatta, with a fine array of rolls and cakes provided by members and organised by Tracy Ramage and Rachael Porteous. The evening was warm enough for the prize giving to take place on the beach, with this year’s medals using flat pebbles.

Thanks to Sandy Wallace for coordinating the regatta and acting as beach master; to David Davidson for organising the racing, umpiring and safety boats; and to all those Club members who helped with the many activities that make NB Regatta the climax of the racing season.